What Gets Your Dishes Cleaner: You or Your Dishwasher?

by John Perritano May 10, 2018
Today's high-tech dishwashers technically do a much better job at sanitizing than a simple handwashing. Erik Tham/Getty Images

Someone needs to erect a statue of Josephine Cochrane. If it wasn't for this daughter of the Victorian Age, all of us would be washing dirty dishes by hand. Not only would that really suck, but it wouldn't be at all sanitary. You see, dishwashers kill more germs than handwashing. More on that later, but first, a bit about this heroine of the kitchen.

Cochrane lived a well-heeled life and loved to entertain her many friends. Over the course of time, her household servants had chipped their fair share of the family's 17th-century china. Frustrated, Cochrane began washing the dishes herself, a task she hated. She wondered why someone hadn't invented a machine to make it easier. In 1886, she took matters into her own dishpan hands and built the first practical dishwasher, improving on an 1850 design by some guy named Joel Houghton.

Houghton's device was hand-cranked and only splashed water on dirty dishes. Cochrane's washer was more thoughtful. It had a motor that turned a wheel that pumped hot soapy water from a boiler over the dishes. It would take a while for Cochrane's dishwasher to catch on, but when it did, people loved it.

What Cochrane didn't know was that hand-washing dishes was less sanitary than cycling them through the dishwasher. Today's dishwashers use scalding hot water, high-tech spray nozzles, and other features to cleanse dishes and rid them of germs and bacteria. Handwashing doesn't even come close. That's because our hands, as The Washington Post points out, cannot withstand the "140 or 145 degrees Fahrenheit [60 to 62 degrees Celsius] — that many dishwashers use to get stuff really clean."

Moreover, the sponge a person uses is a cesspool of some of the most awful, sickening creatures in your kitchen. Scientists have found nearly 400 different species of bacteria on household kitchen sponges. The density is astronomical — around 45 billion per square centimeter. Yuck!

Experts say using a dishwasher is not only healthier, but it will save you time, money, water and energy. According to the Environmental Protection Agency and the U.S. Department of Energy, new ENERGY STAR dishwashers use less energy and water — 5,000 gallons a year — than handwashing.

Now you see why Josephine Cochrane needs to be immortalized with a monument. Romania in 2013 had the good sense to put her on one of its stamps.

How Much Money Do You Really Make Selling Stuff Like Rodan + Fields? 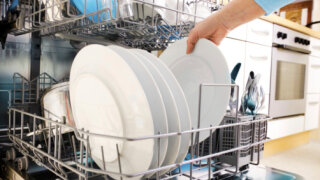 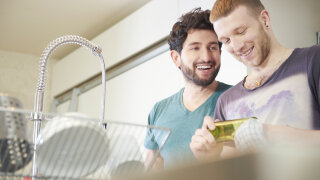 Could washing dishes by hand lead to fewer allergies? 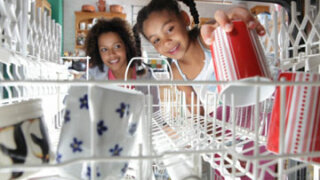