The Parts of an Air Conditioner 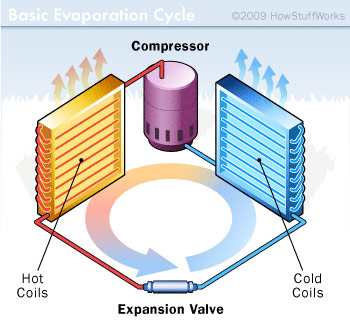 Let's get some housekeeping topics out of the way before we tackle the unique components that make up a standard air conditioner. The biggest job an air conditioner has to do is to cool the indoor air. That's not all it does, though. Air conditioners monitor and regulate the air temperature via a thermostat. They also have an onboard filter that removes airborne particulates from the circulating air. Air conditioners function as dehumidifiers. Because temperature is a key component of relative humidity, reducing the temperature of a volume of humid air causes it to release a portion of its moisture. That's why there are drains and moisture-collecting pans near or attached to air conditioners, and why air conditioners discharge water when they operate on humid days.

Still, the major parts of an air conditioner manage refrigerant and move air in two directions: indoors and outside:

The cold side of an air conditioner contains the evaporator and a fan that blows air over the chilled coils and into the room. The hot side contains the compressor, condenser and another fan to vent hot air coming off the compressed refrigerant to the outdoors. In between the two sets of coils, there's an expansion valve. It regulates the amount of compressed liquid refrigerant moving into the evaporator. Once in the evaporator, the refrigerant experiences a pressure drop, expands and changes back into a gas. The compressor is actually a large electric pump that pressurizes the refrigerant gas as part of the process of turning it back into a liquid. There are some additional sensors, timers and valves, but the evaporator, compressor, condenser and expansion valve are the main components of an air conditioner.

Although this is a conventional setup for an air conditioner, there are a couple of variations you should know about. Window air conditioners have all these components mounted into a relatively small metal box that installs into a window opening. The hot air vents from the back of the unit, while the condenser coils and a fan cool and re-circulate indoor air. Bigger air conditioners work a little differently: Central air conditioners share a control thermostat with a home's heating system, and the compressor and condenser, the hot side of the unit, isn't even in the house. It's in a separate all-weather housing outdoors. In very large buildings, like hotels and hospitals, the exterior condensing unit is often mounted somewhere on the roof.