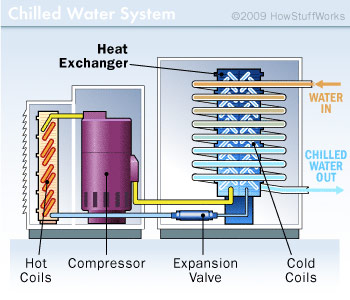 Although standard air conditioners are very popular, they can use a lot of energy and generate quite a bit of heat. For large installations like office buildings, air handling and conditioning is sometimes managed a little differently.

Some systems use water as part of the cooling process. The two most well-known are chilled water systems and cooling tower air conditioners.

Because of rising electrical costs and environmental concerns, some other air cooling methods are being explored, too. One is off-peak or ice-cooling technology. An off-peak cooling system uses ice frozen during the evening hours to chill interior air during the hottest part of the day. Although the system does use energy, the largest energy drain is when community demand for power is at its lowest. Energy is less expensive during off-peak hours, and the lowered consumption during peak times eases the demand on the power grid.

Another option is geo-thermal heating. It varies, but at around 6 feet (1.8 meters) underground, the earth's temperature ranges from 45 to 75 degrees Fahrenheit (7.2 to 23.8 degrees Celsius). The basic idea behind geo-thermal cooling is to use this constant temperature as a heat or cold source instead of using electricity to generate heat or cold. The most common type of geo-thermal unit for the home is a closed-loop system. Polyethylene pipes filled with a liquid mixture are buried underground. During the winter, the fluid collects heat from the earth and carries it through the system and into the building. During the summer, the system reverses itself to cool the building by pulling heat through the pipes to deposit it underground [source: Geo Heating].

For real energy efficiency, solar powered air conditioners are also making their debut. There may still be some kinks to work out, but around 5 percent of all electricity consumed in the U.S. is used to power air conditioning of one type or another, so there's a big market for energy-friendly air conditioning options [source: ACEEE].