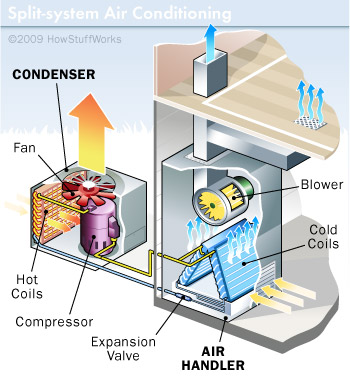 A window air conditioner unit implements a complete air conditioner in a small space. The units are made small enough to fit into a standard window frame. You close the window down on the unit, plug it in and turn it on to get cool air. If you take the cover off of an unplugged window unit, you'll find that it contains:

The fans blow air over the coils to improve their ability to dissipate heat (to the outside air) and cold (to the room being cooled).

When you get into larger air-conditioning applications, its time to start looking at split-system units. A split-system air conditioner splits the hot side from the cold side of the system, as in the diagram below.

The cold side, consisting of the expansion valve and the cold coil, is generally placed into a furnace or some other air handler. The air handler blows air through the coil and routes the air throughout the building using a series of ducts. The hot side, known as the condensing unit, lives outside the building.

The unit consists of a long, spiral coil shaped like a cylinder. Inside the coil is a fan, to blow air through the coil, along with a weather-resistant compressor and some control logic. This approach has evolved over the years because it's low-cost, and also because it normally results in reduced noise inside the house (at the expense of increased noise outside the house). Other than the fact that the hot and cold sides are split apart and the capacity is higher (making the coils and compressor larger), there's no difference between a split-system and a window air conditioner.

In warehouses, large business offices, malls, big department stores and other sizeable buildings, the condensing unit normally lives on the roof and can be quite massive. Alternatively, there may be many smaller units on the roof, each attached inside to a small air handler that cools a specific zone in the building.

In larger buildings and particularly in multi-story buildings, the split-system approach begins to run into problems. Either running the pipe between the condenser and the air handler exceeds distance limitations (runs that are too long start to cause lubrication difficulties in the compressor), or the amount of duct work and the length of ducts becomes unmanageable. At this point, it's time to think about a chilled-water system.