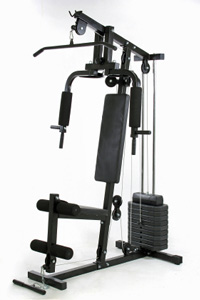 All-in-one equipment helps you do many different types of exercise without having to own multiple machines.
© iStockphoto.com/Erdosain

Have you ever made a New Year's resolution that had something to do with losing weight or getting in better shape? If so, you're not alone. Year after year, improving personal fitness is often among the most popular yearly resolutions.

With obesity comes health risks. According to WebMD, someone who is 40 percent overweight is twice as likely to die prematurely than someone who is within his or her healthy weight range [source: WebMD]. Heart disease, diabetes, high blood pressure, cancer, osteoarthritis and gout are just some of the medical conditions associated with obesity. That said, it's not too late to do something about it.

Exercise and diet are the two main components in maintaining a healthy weight. Diet is important and everyone should be wary of what they eat. Exercise, on the other hand, is often overlooked. If you're reading this article, chances are you're ready to do something about your health and physical fitness. While we won't delve into diet in this article, we will discuss all-in-one exercise equipment and give you some insight into which types of machines may work best for your needs.

Let's start with a look at the popular combinations available in the next section. Once you've learned about your options, we'll break down the pros and cons of each type of equipment in an attempt to give you the information you need to make the choice that best serves your needs. Who knows, you may find a solution that'll give you that body the Hollywood stars pay personal trainers so much to help them achieve. So put down the TV remote and learn what an all-in-one home gym can do for you.

A good home gym will have enough features to provide you with a well-rounded strength training program. In other words, a good home gym should be able to work out the muscles in your arms, shoulders, back, stomach and legs. All-in-one exercise systems are designed to work out multiple muscle groups using the same feature. Many times, the way you use the feature is what dictates the muscle trained. It's also important to understand the difference between user-defined and machine-defined exercises. Machine-defined motion is limited to set planes of motion, whereas user-defined motion isn't limited to a particular direction. An example of user-defined movement is lifting a dumbbell. To better illustrate these two principles, think of the last time you lifted something heavy. Did it throw you off balance? If you lifted the same weight using a cable and a pulley, you wouldn't need to worry about the weight moving laterally because it was on a set plane - up or down. This is defined by the machine.

All-in-one exercise systems use weights and pulley and cable systems to provide the resistance needed for weight training. They're usually comprised of stacks of weights that slide on rails along with adjustable pulley systems that are designed to provide the exercises.

These machines can also incorporate other types of resistance mechanisms such as springs, friction, hydraulics or elasticity. Two of the most popular brands of these resistant all-in-one exercise systems on the market today are the Bowflex and Total Gym systems. The Bowflex system uses polymer-based rods the company calls Power Rods to create tension and replaces traditional iron weights with this technology. The Total Gym uses body weight to provide resistance. First, you lie down on a cushion that resembles a sled, which is mounted on rails. To exercise, you pull the weight of your own body up and down the rails using ropes and pulleys. The Bowflex and Total Gym systems both offer a way to work out without using weights.

In the next section, we'll learn about some of the benefits and drawbacks of all-in-one exercise systems.

Long before Arnold Schwarzenegger became the 38th governor of California, the Austrian-born actor graced the silver screen as one of the hottest action heroes in Hollywood. During the 1980s and '90s, Schwarzenegger starred in some of the most popular action films of his generation. But before then, he was one of the most accomplished body builders in the sport's history. Schwarzenegger won the Mr. Universe competition at age 22 and would go on to take body building's top honor of Mr. Olympia a record seven times. The Terminator turned governor amassed a combined 13 world titles including six Mr. Universe crowns and was head of the President's Council on Physical Fitness in 1990. Schwarzenegger parlayed physical fitness into one of the most impressive rags-to-riches stories of the 20th century.

If you're looking to purchase all-in-one exercise equipment, you must first ask yourself what you're trying to accomplish. If you're looking to build or tone muscle, you don't need something that will burn as much fat. If extreme weight loss is what you have in mind, you'll want something that works along those lines. Fortunately, weight training has been proven to burn fat and build lean muscle mass. An all-in-one exercise system can provide what walking or jogging can't. For a complete workout, it's best to have a mixture of weight training and cardiovascular exercise.

All-in-one systems are great for users on a limited budget and with limited space. They start at around $250. If money is no object, you can purchase commercial-grade all-in-one machines that cost more than $4,000. Expensive machines often boast more versatility but that doesn't mean you can't find a feature-rich unit at a reasonable price. Think of it this way: Let's say you spend $1,000 on an all-in-one. If you were to join a gym for $40 a month, which is considered a low price nowadays, you would have paid for your home gym in about two years. If you factor in fuel savings from keeping your car parked in your garage, that time only decreases.

The beauty of all-in-one exercise equipment is its versatility. Machines such as the Life Fitness G7 Home Gym offer user-defined movement and more than 55 exercises while taking up roughly a 7-foot square area (about 0.7 square meters) of floor space. Some machines, such as the Total Gym, can be folded and stowed for even more space saving ability.

A well-rounded exercise regiment on an all-in-one home gym will provide you with the necessary strength training you need to maintain a healthy life. Perhaps the one drawback you'll have to overcome is the lack of a cardiovascular element. All-in-one exercise systems don't have a way to provide that sort of activity. If you have the room and extra cash in your budget, you can add a treadmill, elliptical machine or stationary bike. These machines round out your exercise regiment. Treadmills are collapsible and may be better if you need to conserve space. Other types of machines are bulkier and need more room. Of course, you can save money and space by hitting the pavement with a good set of running shoes. Jogging or running is a perfect compliment to strength training on an all-in-one system and the best part about it is that it's free and the scenery changes, too.

If you prefer working out in the comfort of your own home, an all-in-one home gym may be the perfect solution for you. For more on other all-in-one technologies at HowStuffWorks.com, work out the links on the next page.

Time to Vent: Why You Need to Turn on the Kitchen Exhaust Fan
How Dishwashers Work
How do washing machines get clothes clean?