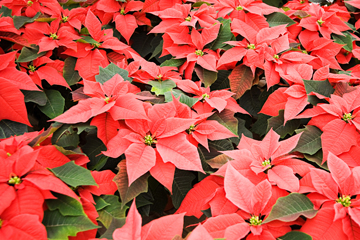 According to the National Capital Poison Center, the toxicity of poinsettias is a false belief made stronger each year at Christmastime.
Image Source/Getty Images

For many generations, holiday decorators have been warned, "Put your poinsettias out of reach — they're poisonous." As a result, countless children and plenty of pets have been shooed away from the plants and told the dangers of ingesting its bright foliage. But is it true that the poinsettia is poisonous, or is it simply one of the most misunderstood flowers on the planet?

The poinsettia is native to Mexico and "blooms" in late fall in its natural habitat, which is why many call it the Christmas flower. It's not actually a bloom since the showy parts are not the flower, but people use the term nonetheless. As autumn draws to a close, artful arrangements of poinsettia plants announce the arrival of the holiday season in the U.S. and beyond.

Before we consider the poinsettia's toxicity (or lack thereof), let's review the parts of the plant:

The bracts, which are typically bright red, but may be white, yellow, pink or multicolored, are the parts for which the poinsettia is prized. The flower portion of the poinsettia plant is the cluster of small pollen-containing yellow buds at the center of the bracts [source: Benson]. Among those who consider the plant poisonous, most believe it is the colored bracts that pose the greatest threat.

So, where did the poinsettia's poisonous reputation come from? By most accounts, the myth began after a claim in 1919 that a small child's death was caused by having eaten the red bracts of the plant [source: Scitable]. However, there is no evidence to suggest that the poinsettia can cause more than a stomachache if ingested.

There is evidence that clears the poinsettia's tarnished reputation. A 1971 study found that high doses of poinsettia plants fed to rats caused no adverse effects, and subsequent similar studies have confirmed those findings [source: Texas A&M]. According to the National Capitol Poison Center, the toxicity of poinsettias is nothing more than a widely held, yet false, belief made stronger each year at Christmastime [source: National Capital Poison Center].

One fact that can't be disputed about this fascinating flower is that it's an economic powerhouse. Poinsettias are the best-selling plant in North America, with the majority sold in the six weeks leading up to Christmas [source: University of Illinois].

Technically speaking, we should point out that poinsettias aren't completely harmless. Like other nonfood items, they should not be eaten, as doing so is likely to cause gastrointestinal discomfort. Also, like its cousin the rubber tree plant, poinsettias contain a form of natural latex, so anyone with a latex allergy should avoid handling them [source: Colorado State University].

In summary, the poinsettia is no more toxic than any garden-variety houseplant. However, despite evidence clearly vindicating the plant from any wrongdoing, people will probably continue to issue poinsettia-related warnings during the holiday season. It's hard to recover from a bad reputation — even for a plant.