How is an aging baby boomer generation changing the design of homes? 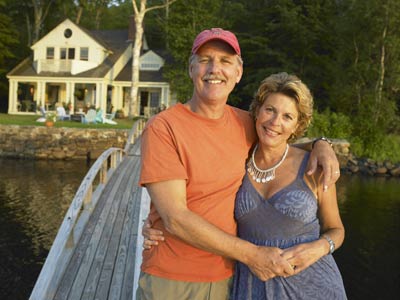 Baby boomers, or the 75 million Americans born between 1946 and 1964, are getting older, with the first wave of boomers turning 65 in 2011. Baby boomers will have a very different sort of retirement, though. They're more likely to work longer, start a second career, volunteer or take classes than their parents' generation. And ­while previous generations headed for Florida and nursing homes, baby boomers want to stay put.

In a 2000 survey conducted by the AARP (formerly the American Association of Retired Persons), 71 percent of Americans aged 45 and older said that they "strongly agreed" that they wanted to stay in their homes. This phenomenon is known as aging in place, with familiar surroundings and objects replacing the institutional walls of a nursing home.

This very simple desire to stay in their own houses may change the way homes are designed. The home-building industry thinks that aging will be the second-biggest influen­ce on home design in the next few years, second only to finding enough skilled laborers to complete the work [source: NAHB]. While baby boomers don't want to move to a retirement home, they're aware that their home will need to accommodate the decreased mobility and ability that sometimes accompanies old age.

At the same time, boomers aren't ready for their house to look like a nursing home, even if they do already have aging parents living with them. Boomers want to plan for the possibility of being in a wheelchair without spending years in a home that looks like it was designed for a wheelchair. That's why so many baby boomers are embracing universal design, a design that allows function and aesthetics to coexist.

Universal design was developed by a wheelchair-bound architect who thought that buildings should be designed for everyone, regardless of ability or age. The concept has been around since the 1970s, but it has gained a crucial fan: the AARP. The AARP promotes universal design to its members, and as a result, 75 percent of contractors polled by the National Association of Home Builders report an increase in the number of requests for work related to aging in place [source: NAHB].