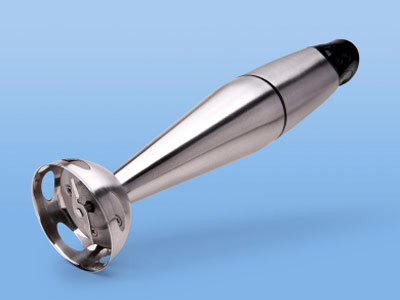 Like a countertop blender, an immersion blender uses blades to turn solids into liquids.
© iStockphoto/Alexandra Draghici

­In their vast number of makes, models and options, blenders are a lot like cars. Make a trip to the local appliance store, and you'll find models that range from the Hyundai of blenders, with a 450-watt motor and a white plastic base, to the Mercedes of blenders, with a 750-watt motor and stainless die-cast base with­ digital controls. The main features that differentiate one blender from another are motor speed, controls and design.

Manufacturers typically indicate blender motor speed in watts and occasionally in horsepower -- 1 horsepower equals 746 watts. The majority of household models fall within 500 to 750 watts, though options range from 300 to as high as 1,500 watts. High wattage blenders often cost more than their low watt counterparts, so it may seem like more expensive equals a better blender. But consumer reviews contradict this theory. Tests performed on a wide sampling of blenders conclude that wattage has little correlation to performance [source: Consumer Search].

The wattage number displayed by the manufacturer measures the power consumed by the blender motor. But the power generated by the motor is what dictates performance. You want enough initial torque -- the force that causes rotation around a central point -- to keep the motor from straining when it meets resistance. Since manufacturers don't disclose any of this information, the best way to determine the best blender for your needs is to read consumer reviews, which are readily available for many blenders on the market.

Blender controls are another differe­ntiating factor from one model to another. While experts say that a three-speed (low, medium, high) blender will do everything you need it to, a good number of blenders offer seven or more speeds, helping you choose whether you need to chop, puree or liquefy. Some even expand beyond functions, suggesting speeds for juices, sauces or milkshakes.

Beyond wattage and controls, the feature that often distinguishes one blender model from another is the jar. Blender jars come in three materials -- glass, polycarbonate and stainless steel. Which one to use largely depends on your personal preferences. Glass jars are more prone to breakage, but their weight gives them more stability. They're also scratch-resistant and less likely to retain odors. Polycarbonate jars are lighter and won't shatter if dropped on the floor, but they are prone to scratching and can end up smelling like their contents. Stainless steel is sleek and modern, which makes it aesthetically pleasing, but you can't see inside, so you have to stop the blender to see if everything's liquefied. In addition, glass and plastic usually have markings you can use to measure ingredients directly into the jar, but stainless doesn't.

In terms of design, blenders have come a long way in the past 100 years. Current styles range from no-frills basic to modern to retro with many looks in between. It's safe to say that there are many options to suit your style while adequately attending to your blending needs. To ensure that you don't end up with a blender that exudes fashion over function, be sure to check consumer reviews.­

Next, we'll break down some things to consider when determining what blender suits your needs.

An immersion blender is a cousin of the early drink mixer. It's a handheld, wand-shaped device with a small blender blade at the bottom, and it's useful when you want to blend ingredients in a container like a soup pan. A benefit of an immersion model is that you can blend larger amounts of food than will fit into the jar of a standing blender. You can also blend soups without having to move hot liquid from one container to another. Consumer models usually have a 100- or 200-watt motor and often come with attachments for grinding, chopping and whisking. ­