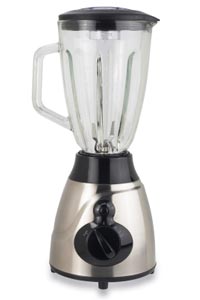 The parts of the blender, from top to bottom, are the lid, jar, blades, gasket, jar base and housing.
© iStockphoto/rolf bodmer

The individual, and often replaceable, components of a blender are pretty basic and consist of the following:

In a knee-bone-connected-to-the-shin-bone sort of way, here's how the parts work together. The base of the blender is the housing, which contains a high-speed, fan-cooled electric motor as well as the speed controls. The hefty weight of the housing keeps the blender on the counter during blending. In some models, the blade is permanently attached to the housing, but in most cases, the blade, gasket and jar base are all separate pieces that fit together and attach to the jar. The blade sits inside the gasket, which prevents leakage. These two parts fit snugly into the jar base, which screws onto the jar.

The assembled jar snaps onto a coupler, also known as a clutch or a serrated drive, depending on the manufacturer, which protrudes from the housing and attaches to the blade. The coupler connects to the motor, and this is the device that controls the movement and speed of the blender.

The lid forms an airtight seal on the jar -- prepare to wipe down your walls, counter and floor if you forget the lid on a full blender. The lid usually has a removable piece called a fill cap, which allows you to add ingredients without stopping the blender. In some models, this piece serves a dual purpose as a measuring cup.

The blades of a blender are constructed of stainless steel for durability and maximum sharpness. Most configurations consist of four blades arranged in multiple planes and set at different angles. This results in more contact between the food and the blades. The shape of the jar plays a part in the blender's efficiency, too -- tapered jars, the most effective shape, funnel food down into the blades.

­­To explain what happens to your food when you blend it, let's follow the path of a strawberry that you drop into the jar with other­ ingredients to create a delicious smoothie. You push a button to start the blender, and the motor begins to turn the blades. The circular whirring motion creates a vortex, defined as a spiral movement in a fluid. In the blender, the fluid includes both liquid ingredients and air. The vortex causes a vacuum at the center of the jar, which pulls the strawberry toward the middle, much like a tornado. Unlike a tornado, though, a blender jar contains the vortex.­

As the strawberry combines with the other ingredients and begins to liquefy, the liquid follows the blade in a whirling motion around the container, forming a well near its center. The well in the center of a blender's vortex is shallow, so it displaces the blender's contents as they're drawn toward the axis at the center of the blade. The whirling motion and lack of space below the blades forces the liquefied strawberry up and out the sides. This circular pattern continues, whipping air into the contents, which helps mix the ingredients more quickly, until you stop the blender. The final result is a frothy strawberry smoothie with a homogenized blend of ingredients and a consistent texture.

In our next section, we will talk about what makes one blender different from another and what to look for when shopping for one.