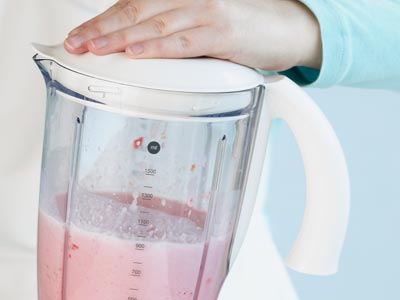 Got a hankering for a sweet, frozen smoothie? A blender's just the thing. See more pictures of appliances.
Howard Shooter/Dorling Kindersley RF/Getty Images

­Say you want to turn the contents of your market's produce section into a frothy breakfast drink. Or maybe you're craving a refreshing frozen cocktail to combat the summer heat. Or perhaps you need to dislodge phage particles from bacterial cells. What do chefs, bartenders and geneticists have in common? They all use blenders. In the kitchen, a blende­r is the appliance you can't live without if you want to turn solid ingredients into liqu­id deliciousness -- from smoothies and shakes to salad dressings and soups.

Blenders were invented in the early 1900s to help meet the demand for malted milk drinks, which physicians prescribed to help build strength. Blenders quickly made their way into soda fountains as a method for whipping up ice cream concoctions. However, it wasn't until 1937 that the blender found the popularity it has today as an indispensable vehicle for mixing up cocktails. Fred Waring, the leader of the big-band TV and radio stars "Fred Waring and the Pennsylvanians," took an interest in the blender as a means to make drinks for a raw food diet he had been prescribed for an ulcer. He founded the Waring Company, which funded the development and manufacturing of an improved version of the blender. Waring marketed it as the Miracle Mixer, an essential tool for making daiquiris. Renamed the Waring Blendor, this revolutionary invention was used by Jonas Salk when he developed the vaccination for polio. It soon caught on as a "liquidizer," useful for making health food drinks for special diets. And a frozen margarita wouldn't be the same without it.

­Blenders are versatile appliances that have a variety of uses in the home, business and laboratory. T­he main function in home and bar use is geared toward crushing ice. Blenders also liquefy and emulsify softer food ingredients, such as fruit and yogurt, which results in a thick consistency and a smooth texture. You can find commercial blenders in plastics manufacturing plants, where they blend various powders and dry materials. Blenders also have a place in the lab for research in industries such microbiology, where researchers use it to extract bacteria from samples.

So what should you look for in a blender, and what's behind that smooth swirl that appears when your blended beverage is ready to drink? Find out on the next pages.