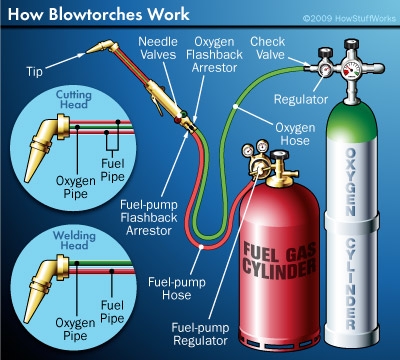 Components of a blowtorch
HowStuffWorks.com

Gas blowtorches, even professional ones, are fairly simple constructions. Their basic design has not really changed in the past century. A professional blowtorch usually consists of a cylinder of fuel gas, a cylinder of oxygen, two gas regulators, two hoses, the torch and the tip.

Regulators on the cylinder heads control the pressure and flow of the gas. Adjusting them to the appropriate pressures is essential to preventing explosions. A regulator has two gauges: the high-pressure gauge reads the gas pressure in the tank, and the low-pressure gauge reads the gas pressure for delivery to the hose and torch. Learn more about pressure and how to measure it in How Tire Pressure Gauges Work.

The hoses that connect the steel cylinders to the torch are made of strong, flexible material, usually rubber. To avoid confusion, the hose containing oxygen typically is green, while the fuel-gas hose is red.

The torch head has two needle valves, which are circular knobs that control the flow of either the oxygen or the fuel gas. The tip attaches to the torch head, and people change it according to the task being performed and the gas used. When a blowtorch is used for cutting metal, an oxygen pipe sends an additional stream of oxygen directly to the center of the flame, increasing its intensity. Finally, an igniter, or pilot light, much like the one on a gas stove, actually lights the torch. It's a bad idea to ignite these torches with a cigarette lighter or a match because of the dangerously high temperature of the flames.

What prevents this thing from blowing up in your face? Well, the following attachable safety devices usually come standard on blowtorches sold today, but can also be sold separately.

Next, we'll take a close look at the different gases blowtorches consume to attain these high temperatures.

Come on Baby, Light My Blowtorch

Two types of igniters light blowtorches. In the piezo-electric igniter, pulling the trigger launches a hammer against special crystals, which then produces electric voltage and sparks. To find out about more of the various and unexpected uses of piezoelectricity, read about how the lighter in a bbq grill works. A friction igniter, which looks like an oversized safety pin, creates sparks by scratching special crystals when squeezed.