Other Uses for Blowtorches 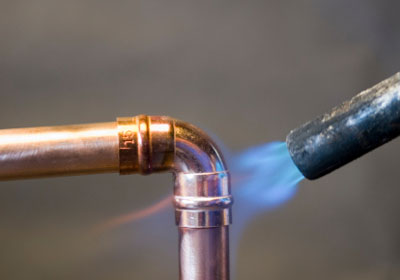 Plumbers use blowtorches to solder and fix copper pipes. The word "solder" (pronounced "sodder," with a silent L) refers both to the process of joining the pipes and to the substance used in the process. To solder, a plumber heats the pipes and then applies solder material, which softens in the heat. As the solder melts, it flows into the gap between the pipes and creates a tightly fitted joint. To learn about a different method of soldering, read about cold heat soldering irons.

In addition to fixing leaky pipes, many people use smaller, handheld blowtorches for cooking, stripping paint and thawing frozen pipes. These simplified torches are relatively inexpensive. To produce a flame, they use pressurized fuel gas, like propane or butane. Rather than having a separate cylinder of oxygen, they rely on the oxygen in the surrounding air to sustain their flame. These kinds of torches can reach temperatures of 3200 to 3800 degrees Fahrenheit (1760 degrees Celsius to 2093 degrees Celsius), lower than those attained by oxyacetylene torches, but still plenty hot.

Handheld butane or propane blowtorches can come in handy in the kitchen. Most commonly, cooks fire them up to caramelize the top layer of sugar on crème brûlée -- a custardy dessert -- add a glossy exterior to chocolate ganache or brown the top of lemon meringue pie. Their focused heat also works well for roasting vegetables and melting cheese. But remember, if you do keep a blowtorch for home use, it's always smart to have a working fire extinguisher and smoke detectors nearby.

In the past, blowtorches commonly were used for stripping paint. After being heated with a blowtorch, paint is soft enough for easy removal with a scraper or putty knife. However, several potential dangers can come from this practice. For instance, the flame can ignite the wood or dust on the paint, injuring the user. In addition, if you apply the blowtorch to a lead-based paint, it can release toxic fumes, which are dangerous to inhale. Because of these reasons, new and safer techniques have been developed for paint removal, such as electric heat guns, and the use of blowtorches for this purpose has generally been abandoned.

Similarly, some people grab their blowtorches to thaw out frozen water pipes. However, experts strongly discourage this practice as it is a safety hazard. If the water inside the pipe starts to boil, the pipe can explode. People have started fires trying to thaw out pipes this way [source: CBC News]. For more ideas on thawing frozen pipes, check out the related section of this article.

Although blowtorches can be a dangerous instrument in the hands of untrained amateurs, people continue to use them. If you're one of them, read more about related subjects, including how fire works, in the Lots More Information page.