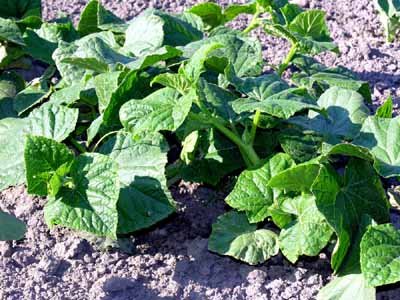 A cucumber vine can sprawl on the ground.

Cucumbers are loved for their refreshing and crisp taste and texture. Also popular pickled, cucumbers add crunch and flavor to many vegetable recipes. In this article, we'll talk about growing cucumbers.

Cucumbers are tender annual vines that can sprawl on the ground or be trained to climb. Both the large leaves and the stems are covered with short hairs; the flowers are yellow. Some plants have both male and female flowers on the same vine, and there may be ten male flowers to every female flower. Only the female flowers produce cucumbers. Some hybrid cucumbers have only female flowers but need some male flowers to produce. Seed companies will include seeds -- usually indicated by a pink dye on the seed -- that will produce male flowers with such hybrid varieties. These hybrids are usually more productive and set earlier than other varieties.

In the next section, we'll show you how to grow cucumbers. 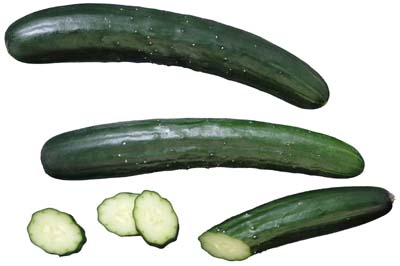 There are many varieties of cucumber available to home gardeners.

The crisp, refreshing taste of cucumbers -- as well as their versatility -- make them a must-have for the kitchen and the garden.

The cucumber is a warm-weather vegetable and very sensitive to frost. It will grow anywhere in the United States, however, because it has a very short growing season -- only 55 to 65 days from planting to harvest -- and most areas can provide it with at least that much sunshine. Cucumbers respond to a rich, well-worked, well-drained soil that is high in organic matter. Sow seeds directly in the garden two to three weeks after the average date of last frost.

To grow transplants indoors, sow seeds three to four weeks prior to planting in the garden. Plant cucumbers in inverted hills, leaving the three strongest plants per hill. Cucumbers need plenty of water to keep them growing fast; don't let the soil dry out. In hot weather the leaves may wilt during the day even when soil moisture is high because the plant is using water faster than its roots can supply it. This is normal; just be sure the plant is receiving regular and sufficient water. Mulch to avoid compaction caused by heavy watering.

Harvest promptly; mature cucumbers left on the vine suppress the production of more flowers. Pick the cucumbers when they're immature -- the size will depend on the variety. When the seeds start to mature, the vines will stop producing.

There are many varieties of cucumbers available to the home gardener. The following are just a few of the good varieties.