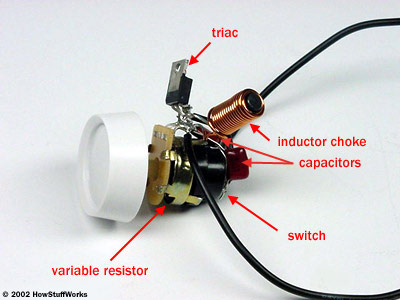 The guts of a basic dimmer switch

If you hook up a really cheap dimmer switch, you may notice a strange buzzing noise. This comes from vibrations in the bulb filament caused by the chopped-up current coming from the triac.

If you've read How Electromagnets Work, you know that electricity flowing through a coiled length of wire generates a substantial magnetic field, and fluctuating current generates a fluctuating magnetic field. If you've read How Light Bulbs Work, you know that the filament at the heart of a light bulb is just a coiled length of wire. It makes sense, then, that this coiled filament becomes magnetic whenever you pass current through it, and the magnetic field fluctuates with the AC current.

Normal undulating AC current fluctuates gradually, so the magnetic field does, too. The chopped-up current from a dimmer switch, on the other hand, jumps in voltage suddenly whenever the triac becomes conductive. This sudden shift in voltage changes the magnetic field abruptly, which can cause the filament to vibrate -- it's rapidly drawn to and repelled by the metal arms holding it in place. In addition to producing a soft buzzing sound, the abruptly shifting magnetic field will generate weak radio signals that can cause interference on nearby TVs or radios!

Better dimmer switches have extra components to squelch the buzzing effect. Typically, the dimmer circuit includes an inductor choke, a length of wire wrapped around an iron core, and an additional interference capacitor. Both devices can temporarily store electrical charge and release it later. This "extra current" works to smooth out the sharp voltage jumps caused by the triac-switching to reduce buzzing and radio interference. (See How Inductors Work and How Capacitors Work for more information.)

Some high-end dimmer switches, such as the ones commonly used in stage lighting, are built around an autotransformer instead of a triac. The autotransformer dims the lights by stepping down the voltage flowing to the light circuit. A movable tap on the autotransformer adjusts the step-down action to dim the lights to different levels. Since it doesn't chop up the AC current, this method doesn't cause the same buzzing as a triac switch.

There are a lot of other dimmer switch varieties out there, including touchpad dimmers and photoelectric dimmers, which monitor the total light level in a room and adjust the dimmer accordingly. Most of these are built around the same simple idea -- chopping up AC current to reduce the total energy powering a light bulb. At the most basic level, that's all there is to it.

For more information on dimmer switches, including an installation guide, check out the links below.