A "normal light bulb" is also known as an incandescent light bulb. These bulbs have a very thin tungsten filament that is housed inside a glass sphere. They typically come in sizes like "60 watt," "75 watt," "100 watt" and so on.

The basic idea behind these bulbs is simple. Electricity runs through the filament. Because the filament is so thin, it offers a good bit of resistance to the electricity, and this resistance turns electrical energy into heat. The heat is enough to make the filament white hot, and the "white" part is light. The filament glows because of the heat -- it incandesces.

The problem with incandescent light bulbs is that the heat wastes a lot of electricity. Heat is not light, and the purpose of the light bulb is light, so all of the energy spent creating heat is a waste. Incandescent bulbs are therefore very inefficient. They produce perhaps 15 lumens per watt of input power.

A fluorescent bulb uses a completely different method to produce light. There are electrodes at both ends of a fluorescent tube, and a gas containing argon and mercury vapor is inside the tube. A stream of electrons flows through the gas from one electrode to the other (in a manner similar to the stream of electrons in a cathode ray tube). These electrons bump into the mercury atoms and excite them. As the mercury atoms move from the excited state back to the unexcited state, they give off ultraviolet photons. These photons hit the phosphor coating the inside of the fluorescent tube, and this phosphor creates visible light. It sounds complicated, so lets go through it again in slow motion:

The phosphor fluoresces to produce light. 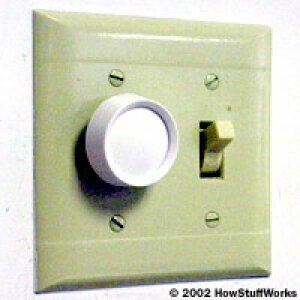