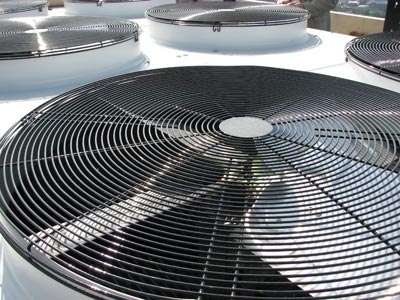 Air conditioning with ice blocks is taking root among some of the world's most powerful companies.

A novel method of air conditioning is taking root among some of the world's most powerful corporations, and it uses the simple power of ice. Morgan Stanley and Credit Suisse now use massive ice blocks instead of traditional air-conditioning systems in some of their offices. Credit Suisse is considering expanding the system beyond its 1.9-million-square-foot Manhattan office to its other locations around the world, but they won't be alone. An estimated 3,000 facilities around the world use ice-based cooling systems.

The system is not only more environmentally friendly but also saves big companies like Goldman Sachs, which put an ice cooling system in its new flagship office, millions of dollars in utility bills. The system works by making ice at night, when lower power usage means energy is cheaper and lower temperatures mean less power is required to freeze water. The larger the difference between nighttime and daytime temperatures is, the greater the energy savings. In Credit Suisse's system, the ice forms overnight, and as it melts during the day, fans blow cold air into the cooling system and throughout the building. At the end of the day, the 51,200 gallons of water -- spread across three rooms in 64 tanks -- is ready to be frozen again. The ice-block system can also be combined with traditional air conditioning, which is the case in Credit Suisse's New York office.

The ice system essentially acts like an ultra-efficient battery, storing energy that's gathered cheaply at night and releasing it during the day. Ice makes a convenient and efficient medium for the job. By volume, it has up to triple the energy-holding capacity of water. The system also has less potential for breakdown compared to more traditional systems.

The ice cooling system is intriguing and energy efficient, but it's not entirely original. In the 19th century, a hospital in Florida used ice to cool hospital rooms and many a home chemist has used ice to cool himself on a hot day. Still, you're unlikely to find an ice-based cooling system in someone's home. The cooling equipment requires a lot of space and a significant upfront investment -- Credit Suisse paid $3 million for theirs -- though the investment presumably pays for itself over time.

The state of New York, along with other state and municipal governments, is encouraging companies to make environmentally-friendly infrastructure investments, in some cases offering tax breaks or grants. The pollution and waste caused by skyscrapers constitutes a major problem for large systems. Ice-cooling systems do more than save on electricity bills; by using power at night, they ease strain on already overtaxed electrical grids -- a process known as "load shifting" -- using energy during non-peak hours.

On the next page, we'll look at some other alternatives to air conditioning.

Several companies, such as Ice Energy, now offer products that work with or in place of traditional air conditioners in order to reduce energy use.

Every year, Americans' heating and cooling systems produce 300 billion pounds of carbon dioxide [Source: EMagazine]. Fortunately, the European Union outlawed the refrigerants used in some old air conditioners that harm the ozone layer, and they will be illegal in the United States in 2010. But the booming economies of India and China and the accompanying rise in living conditions in those countries now means that millions of people are buying energy-draining, ozone-layer-depleting air-conditioning units. In other words, air conditioning is only making global warming worse, but what can be done to make air conditioning units more efficient? Should more environmentally friendly cooling methods replace all conventional air conditioners? We'll take a look at some options in this section.

A company called Ice Energy manufactures the Ice Bear, a unit designed to work alongside a traditional air conditioner. Like the large system used by Credit Suisse, the Ice Bear is designed to run indoors and at night, when temperatures and energy costs are lower. Ice Bear creates a block of ice at night that cools the refrigerant during the day, rather than running the refrigerant through a condenser (at peak hours) that requires a lot of energy.

Underneath the Jordan Quad Parking Lot at Stanford University, 360 miles of piping run through a four-million-gallon tank of water [Source: Stanford University]. At night, subzero ammonia -- a common refrigerant -- runs through the pipes, freezing the water into giant blocks of ice. The system, which is one of the largest of its kind in the United States, sends cold water from the melting ice throughout Stanford's campus, cooling buildings from noon to 6 p.m. When the facility was first built in the mid-1970s, it skipped the ice stage, instead directly cooling water that was piped through campus. A $22 million renovation -- completed in 1999 -- converted it to its present form, which saves the university a reported $500,000 a year on energy bills.

Evaporative coolers, also known as swamp coolers, are another popular alternative. These coolers don't use refrigerants. Instead, they use the cooling effect of water evaporation to lower air temperature. You've probably experienced the same effect after a game of basketball or a workout session. While you may initially feel hot from exertion, as sweat evaporates from your body, you'll likely start to feel chilly. Evaporative coolers utilize the same principle. They're also light on energy consumption but are often maintenance intensive and require leaving some windows open.

You may be familiar with a variety of other alternatives to traditional air conditioning systems. Opening windows to allow a draft in and using fans are both common cooling methods that aren't energy intensive. Good insulation and situating your house to take advantage of natural wind currents can lessen or eliminate the need for a cooling system, particularly if you live in a moderate climate.

If your home or office already has an air-conditioning system, there are still some things you can do. First, make sure it's a modern unit without any ozone-harming refrigerants. Close all windows when your air conditioner is running, and look into renewable power sources like roof-mounted solar panels. If you have a window-mounted air conditioner, seal the area around it and get an energy-efficient model (if you don't plan to switch to central air). Finally, make sure your home or office central-air conditioner fits the space. If yours is too big, you'll be constantly turning it on and off, wasting energy in the process.

For more information about ice-block cooling systems, making your house more energy efficient and other related topics, please check out the links on the next page.