Browse the article How Grills Work 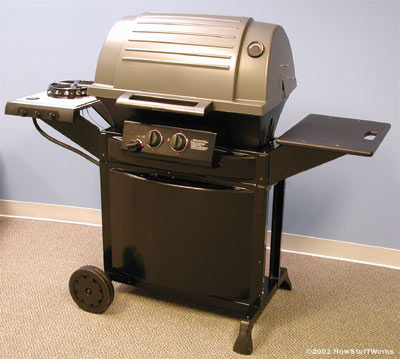 Grilling is done all year, but is most popular during the spring and summer. See more pictures of grilling.

Outdoor grilling is a very popular method of cooking. In fact, approximately 75 percent of U.S. households have a grill. A grill consists of a cooking surface, typically made of parallel metal bars or a porcelain-covered metal grid, over a fuel source capable of generating intense heat, usually up to temperatures of 500 degrees Fahrenheit (260 C) or more.

There are several different types of grills, but gas and charcoal are by far the most common.

In this article, you will learn about the parts of a grill and how they work together. You'll learn what charcoal is and how it is made, as well as about the differences between liquid-propane (LP) and natural-gas grills. You'll also find out about other less-common types of grills and their fuel sources.

The components of a grill can range from very simple to incredibly sophisticated. The simplest grill is a charcoal burner and has three components:

A common version of this arrangement uses a shallow, round container mounted on a metal tripod, with a round cooking grill that rests on top of the container. Look at the example below:

Charcoal grills can be more complex than this -- some have a hood to cover the grill and additional tiered cooking surfaces -- but the basics are the same.

The fuel source for charcoal grills has been around for at least 5,000 years. No one is certain who discovered charcoal or even what civilization first used it. Evidence of charcoal has been found all over the world. It was even used in the embalming process for Egyptian mummies!

You may not realize it, but charcoal is not a rock or even some type of coal. It is actually wood! Charcoal is created by heating wood to high temperatures in the absence of oxygen. That is, you take wood, put it in a sealed box of steel or clay and heat it to about 1000 F (538 C).

Why would you go through such a tedious process instead of just burning the wood as it is? Freshly cut wood contains a lot of water -- sometimes more than half its weight is water. Seasoned wood (wood that has been allowed to sit for a year or two) or kiln-dried wood contains a lot less water, but it still contains some. Watery wood does not make for very efficient cooking. Also, when the tree was alive it contained sap and a wide variety of volatile hydrocarbons in its cells. "Volatile" means that these compounds evaporate when heated.

While it may not look like it, charcoal is actually wood.

When you put a fresh piece of wood or paper on a hot fire, the smoke you see is those volatile hydrocarbons evaporating from the wood. They start vaporizing at a temperature of about 300 F (149 C). If the temperature gets high enough, these compounds burst into flame. Once they start burning, there is no smoke because the hydrocarbons turn into carbon dioxide and water vapor (both invisible).

This explains why you see no smoke from a charcoal fire (or a fire that has burned down to embers). This process drives off all of the volatile organic compounds and leaves behind pure carbon and ash (the non-burnable minerals in the tree's cells). When you light the charcoal, what is burning is the pure carbon. It combines with oxygen to produce carbon dioxide, and what is left at the end of the fire is the ash -- the minerals. This produces a very intense heat with very little smoke, making charcoal very useful as a cooking fuel that will not overwhelm the flavor of the food with the elements found in normal wood smoke.

Grilling enthusiasts passionately argue the merits of charcoal versus gas grilling, citing especially the difference in flavor. Charcoal does provide a distinctive flavor that is not easily reproduced. It is a tough decision for many people: the convenience of a gas grill against the flavor of charcoal. Let's take a look at gas grills and how they work.­

Shopping for a grill? 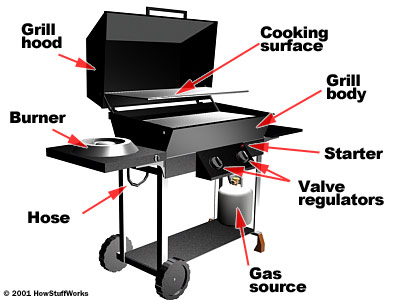 Components of a gas grill

Even the simplest gas grill is more complex than a typical charcoal grill. Common components of a gas grill include:

The grill body houses all of the other components except the hood. The hood covers the cooking surface and serves to trap the heated air inside, which increases the temperature inside the grill.

The gas source is connected to the valve regulators via the main hose. The regulators are controlled by knobs that allow you to determine how much gas is allowed through the valve to the burner. Most grills have two main burners, with a regulator for each one. Each burner has a series of tiny holes along its length that the gas exits through.

Three things are required for a gas grill to ignite properly:

The gas is supplied from the propane tank or the natural-gas pipeline (more on this in the next section), and oxygen comes from the air. But where does the spark come from?

The spark usually is supplied by the grill starter, sometimes called the igniter. This is a push-button or rotating knob that creates a spark of electricity to ignite the gas. The starter uses piezoelectricity to generate a nice spark that lights the grill.

The starter on this grill uses a knob that you turn to trip the hammer.

Certain crystalline materials (like quartz, Rochelle salt and some ceramics) have piezoelectric behavior. When you apply pressure to them, you get a charge separation within the crystal and a voltage across the crystal that is sometimes extremely high. For example, in a grill starter, the popping noise you hear is a little spring-loaded hammer hitting a crystal and generating thousands of volts across the faces of the crystal.

Turning the knob on this grill causes the spark to jump between the two electrodes.

A voltage this high is identical to the voltage that drives a spark plug in a gasoline engine. The crystal's voltage generates a spark large enough to light the gas in the grill.

The burner is where all the actual burning occurs. It mixes the gas with oxygen and spreads it out over a large surface area to burn. Each burner has a pair of electrodes connected to the starter. When the starter's hammer is tripped, the resulting surge of electricity causes a spark to arc across these electrodes and ignite the gas/oxygen mixture. To create an evenly heated cooking surface, most gas grills have at least two separate burners.

Next, we'll take a look at the fuels most often used in gas grills. 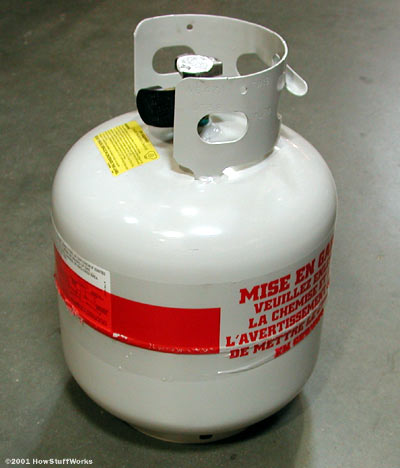 Most gas grills use a propane tank like this one.

The majority of gas grills use metal tanks full of liquid propane (LP) gas. LP gas has the advantage of coming in a portable tank, and it is available nearly everywhere, whereas natural gas uses a pipe connected to the gas main at your home.

Why can you get LP gas in a tank but not natural gas? Propane normally changes from a liquid to a gas at -46 F (-43 C). However, propane has the nice property that when you compress it, it condenses into a liquid and will stay that way until it is uncompressed. This means that propane is much easier to store in a tank than natural gas, which does not easily compress. Because natural gas doesn't compress well into a liquid form, it is typically delivered via a dedicated pipeline to your home.

Another benefit of LP is that it contains much more energy than natural gas. A grill's cooking capability is rated in British thermal units (BTU). A BTU is the amount of heat required to raise the temperature of 1 pound (0.45 kg) of water 1 F (0.56 Celsius). A cubic foot of natural gas contains something like 1,000 BTU of energy. One cubic foot (1 ft3) of propane contains perhaps 2,500 BTU. Grills typically range from 20,000 BTU to about 50,000 BTU. A higher BTU rating normally indicates a larger grill with a greater cooking surface.

On a grill, you can see the difference between natural gas and LP most easily by looking at the pipes connecting to the burners. The pipe on a natural-gas grill is about twice as big as the one on a propane grill. Natural gas is mostly methane but contains significant quantities of other compounds, including butane, ethane and propane. You normally would only buy a natural-gas grill if you plan to connect it directly to a gas pipe in a permanent location and if natural gas is available in your area.

Propane is created from petroleum and contains aliphatic hydrocarbons -- hydrocarbons composed of nothing but hydrogen and carbon atoms. When you take petroleum and process it in a refinery, you end up with hydrocarbon chains of different lengths. These different chain lengths can then be separated from each other and blended to form different fuels. For example, you may get methane, propane and butane. All three are hydrocarbons: 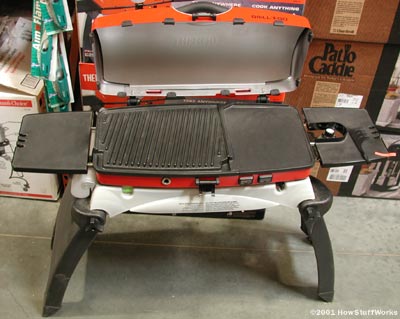 Electric grills are very popular, especially with people who cannot have an outdoor grill.

As you move beyond the basic grill design, most manufacturers offer several options to enhance your grilling abilities. Some of these options are:

While charcoal and gas grills are the most popular, there are alternatives. The most common is electric. An electric grill has a heating element either embedded within the cooking surface or directly below it. A drip pan catches the grease and fat that cooks out of the meat. Electric grills are typically portable, and most are small enough to place on a table or countertop. Unlike gas or charcoal grills, electric grills can be used indoors.

Another type of grill that is catching on at the premium end of the market is infrared. Infrared grills use special ceramic-plate burners that radiate infrared heat. According to Thermal Engineering Corporation (TEC), infrared grilling does not dry the meat out and can generate a much higher temperature (up to 1,650 F / 899 C) than any other type of grill.

Be sure to check out the links on the next page for more information on grills, grill manufacturers and related topics.