What is the cost of a leaky shower head? 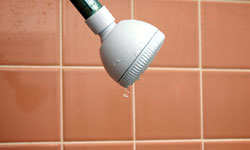 How much money could you waste if you let that shower head drip, drip, drip?
©iStockphoto.com/sorsillo

The constant drip of a leaky shower head is a bit like a nagging conscience, telling you something is wrong. Consider this -- a shower head that leaks 10 drips every minute loses almost 2 gallons (7.6 liters) of water every day. Now, that might not seem like a lot to us, but it can add up in the long run. If you left that shower head dripping for an entire year, you would lose more than 1,000 gallons (3,785 liters) of water. But how much would that water cost you?

According to the American Water Works Association, the average price of water per gallon in the United States is $0.002 -- less than a penny. Letting a year's worth of water drip through the drain would cost you about $1.50. Again, that's about the price of a small cup of coffee, but it's good, clean water that you could have used to make your own coffee.

You also have to think about where the water goes once it drips out and away from your home. Clean water that slips down the drain is treated as sewage by your water company. That means more work for the treatment plant, more energy used, and more disinfectants added (especially chlorine, which raises environmental concerns). That cheap water soon gets expensive.

And finally, chances are you aren't the only one in your region with a leaky shower head. Multiply 2 gallons per day by a few thousand homes and you can imagine the strain on the ecosystem.

You can't single-handedly solve these water worries, but you don't have to be part of the problem. Fixing a leaky shower head is fairly easy and inexpensive. Repairs quickly pay for themselves in money saved. Replace any older shower heads, especially those installed before the 1990s, whether or not they're leaky. Newer models save you up to 3 gallons (11.4 liters) of water per minute. Low-flow shower heads can save even more.

For lots more information on water and your home, see the links on the next page.