Why build a straw bale house?

With the rising price and decreasing availability of lumber, straw has gained attention as a renewable resource that is regularly available as the byproduct of growing grains. Farmers use a little straw to fertilize the ground, but most straw otherwise goes to waste. Each year, 200 million tons of straw go unused in the United States [source: U.S. Department of Energy]. Straw is available in most parts of the country, which reduces transportation costs of construction. With more than 50 percent of all greenhouse gases produced by the construction industry and the transportation associated with it, these savings can be significant [source: Amazon Nails].

Although straw is cheaper than building materials, such as brick or lumber, constructing a straw bale home will usually cost the same as a conventional home because the wall budget is only about 10 percent to 15 percent of the total building budget [source: Magwood, Mack, Therrien]. When you factor in other expenses, such as the foundation, the roof, and the doors and windows, the price of straw bale houses rises in line with more traditional houses.

However, you can squeeze out some cost savings depending on who builds the house. Straw bale raising parties, similar to barn raising parties, are a chance for a bunch of people to stack bales like building blocks. Little experience is needed to participate in building a straw bale home, and it can go fast. Many Web sites and DVDs are available to teach you how to build your own straw bale house, but it's important to realize what you can do on your own and where you might need a contractor's help.

The real cost savings of straw bale building relate to energy efficiency. The straw bales, finished by plaster, have a high R-value. The R-value measures the insulation resistance of the wall; straw bale walls provide an incredible insulation that can easily keep heat in or out, depending on your needs. A straw bale home can save up to 75 percent on heating and cooling costs annually [source: Morrison, Amazon Nails]. This represents a huge savings over the life of the house. These thick walls also provide excellent soundproofing. Straw bale building has been used for recording studios and for homes near busy highways.­ 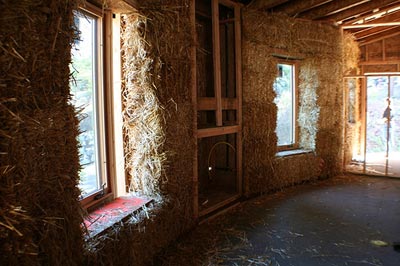 It might seem like straw bale houses pose a tremendous fire hazard, but they provide roughly three times the fire resistance of conventional homes [source: Morrison]. Loose straw is indeed flammable, but the bales are so tightly packed that they actually increase fire resistance. In a tightly packed bale, there's no oxygen, which reduces the chance for combustion. The plaster coating of the walls adds an additional fire-resistant seal. The National Research Council of Canada conducted testing where straw bale walls withstood temperatures up to 1,850 degrees Fahrenheit (1,010 degrees Celsius) for two hours [source: Magwood, Mack, Therrien].

The main threat to straw bale homes is moisture, as it is for many homes. We'll learn how to address this issue in later sections. On the next page, we'll look at how to design a straw bale house.