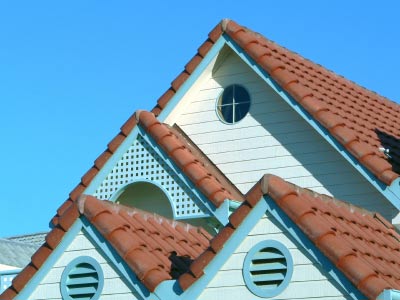 A study in terracotta, blue and white -- Spanish roof tiles on a wood clad house.
© iStockphoto/Leeds

­Tornadoes and hurricanes can unleash a staggering amount of devastation on towns and cities, ripping through homes and businesses with high-speed winds and soaking everything in torrents of precipitation. Among the windswept debris and flattened houses, you'll inevitably find buildings with their roofs ripped clean off. Hurricanes often damage thousands of roofs, which begs the question: If the storms aren't getting any weaker, can we at le­ast make our roofs stronger?

As far as human history goes, the roof is a truly ancient innovation. At some point in prehistory, we decided to upgrade our housing options from caves and tree cover, and we've never looked back. Roofing advancements have continued for millennia, from early thatch roofs and mud huts to massive geodesic domes and vaults of steel and glass. Through all these advancements, however, the basic housing principles of tree and cave have remained. Stone and wood remain the key building components, and even the methods of waterproofing a shelter divide along the paths of tree and cave.

­There are two ways to keep precipitation from penetrating a building. Either you can make your roof a single, impermeable shell (as a solid roof or a membrane-coated bar­rier does) or you can cover it with different overlapping, waterproof tiles or shingles, which divert the water away from the permeable gaps. Against the rain, you can boast the equivalence of a solid shield or armored scales.

Humans have constructed vaulted stone ceilings for hundreds of years, but the high costs have excluded most residential houses from such grandiose architecture. For the most part, we've lived our home lives beneath flat and sloped wooden roofs, sealed against the element with tars, vegetation, and various tiles and shingles.

Today, modern concrete technology allows average homeowners the opportunity to strengthen their roofs with stone, yet without abandoning traditional roofing styles. In this article, we'll look at the way we've beefed up both branches of roofing with concrete roofs and concrete roofing tiles. 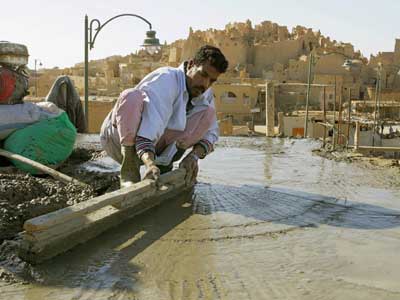 Concrete roofs aren’t necessarily a costly investment. Here, an Egyptian worker levels concrete on the roof of a new building close to the ruins of the ancient fortification of Shali.
Cris Bouroncle/AFP/Getty Images

When considering the possibilities of constructing a concrete roof to protect against storm winds, it's nearly impossible not to think of "The Three Little Pigs." The classic fairytale tells the story of three porcine homeowners and their attempts to barricade themselves against an evil wolf who happens to possess hurricane-force lungs. The wolf makes short work of the houses constructed from straw and wood, but is unable to blow down the house made of brick.

An increasing number of builders have followed the third pig's example by using greater quantities of concrete in home construction. Wood may stand the test of time under normal conditions, but it can easily fail if subjected to additional loads or uplift forces from high winds -- wolf-generated or otherwise.

­A concrete roof is exactly what it sounds like: a solid slab of concrete capping the top of your house. Exact specifications vary, but most concrete roofs are several inches thick. For example, the Florida-based company Hurricane Proof Systems ­ offers a 7-inch (18-centimeter) slab of concrete in three layers.

To install such a roof, a crew first builds a framework for the intended roof. These frames can either be removable concrete forms or stay-in-place insulating concrete forms, which simply become a part of the finished roof. Then a concrete mixture is poured, spread through the framework and reinforced with steel bars, which serve as a kind of skeleton for the cured concrete. While flat roofs are the easiest to create out of concrete, complex sloping roofs are also possible. These options allow concrete roofs to fit virtually any desired housing style, though sloped roofs require a great deal more engineering and design. Contractors can cover the roof with any manner of finish, tiles or shingles to help give it the desired look.

Of course, a concrete roof requires more support than a typical wooden roof. Concrete weighs a lot, and the outside walls have to be capable of supporting the giant slab. Interior support beams can help, but the construction works best when concrete walls, floor and roof form a solid shell. For this reason, adding a concrete roof onto a wood-framed house requires a great deal of structural adjustment. If a concrete roof isn't properly supported, it can collapse, especially if subjected to additional stresses such as earthquakes and snow buildup. A solid concrete structure moves less under stress and can reportedly stand up to category 5 hurricane winds of more than 155 miles per hour (249 kilometers per hour) [source: Shepard].

A concrete roof also cuts down the risk of damage from fire, termites, fungi and water damage, While floodwaters might deform or float a wooden home, a well-built concrete home will stand solid. This makes the structure itself far more salvageable if worse comes to worst. In many areas, concrete roof construction also allows structures to bypass certain building codes and can also cut down on insurance premiums.

The final price tag for a residential concrete roof runs pretty high -- often two to four times as much as a traditional wooden roof would cost [source: Vanderwerf]. That isn't to say you can't construct a concrete roof on the cheap. Less aesthetically minded concrete roofs are common throughout the hurricane-prone Caribbean islands and parts of the developing world. These structures often consist of small, cinderblock homes topped with rows of steel beams and blocks that are covered in a coat of concrete.

Of course, there's more than one way to apply concrete protection to your roof. On the next page, we'll look at concrete roofing tiles. 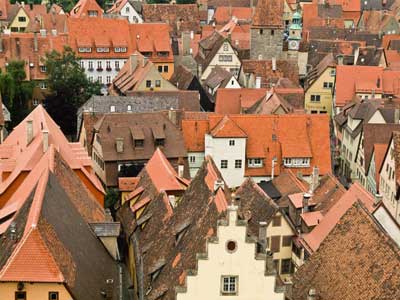 Concrete tiles still cover the roofs of buildings in Rothenburg, Germany, a century after they were installed.
Ellen Rooney/Axiom Photographic Agency/­Getty Images

­Just because it isn't feasible to cap your house with a massive concrete roof doesn't mean you can't apply a little stonelike resilience to your home. In lieu of asphalt shingles or clay roof tiles, some homeowners choose to install tiles made of concrete.

Concrete tiles were first introduced in the 1840s by German cement manufacturer Adolph Kroher, who developed a machine to press out the tiles. The technique became popular in Bavaria, and many of the roofing jobs from Kroher's era continue to hold up to this day.

While concrete tiles don't provide the solid stability of a concrete roof, they do afford protection against up to class 3 hail and wind speeds as strong as 125 miles per hour (201 kilometers per hour) [source: Portland Cement Association]. Unlike petroleum-based shingles, concrete tiles aren't flammable.

Concrete roofing tiles often cost more than some of the cheaper tiling and shingling options, but generally last longer. Modern concrete mixing methods also allow the tiles to be manufactured to fit various style and color requirements. Instead of looking like gritty gray slabs of cement, concrete tiles can even have the appearance of fine ceramics.

However, just because the tiles are made out of concrete doesn't mean they don't require regular upkeep and even replacement from time to time. Despite their durability, tiles can break and dislodge courtesy of earthquakes, sufficiently harsh weather and falling debris. Moss and algae can also develop over time and may require pressure washing or chemical treatment.

Explore the links on the next page to learn even more about concrete and home projects.