Why do I need to use primer? 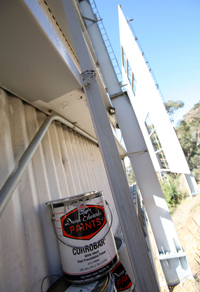 The crew restoring the famous Hollywood sign knew what they were doing when they put a coat of primer on first. See more home design pictures.
David Livingston/Getty Images

Here’s the classic definition of boredom -- sitting around and watching paint dry.

But if you knew exactly what happens during those minutes and hours when paint morphs from a sloshing liquid into a thin, glossy film, you’d be fascinated.

And it has a lot to do with the primer. If what’s underneath the paint is not as it should be, the paint will not dry properly. It could look blotchy with an uneven sheen. It may turn out lumpy with brush marks. It could flake off sooner rather than later. Primer creates a smooth and consistent layer for the paint to be spread over and to bind onto. It’s a sturdy interface.

Consider the analogy of clothing and underwear. In addition to covering our bodies for modesty’s sake and warmth in cold weather, clothing adds beauty, style, personality and color to our persons. Paint can be like that. Underwear, on the other hand, functions as an interface between the skin and the clothing. And just as underwear can correct and mold the body so clothing looks better, primer can correct flawed and uneven surfaces so that the paint looks better and wears better.

So now that you know you need primer to get the best results, how do you know which primer to use? That all depends on your choice of paint.

A test to tell if the existing paint will hold the new paint or primer:

If the surface you want to paint is already painted, the question arises: Is this a good surface on which to apply more paint? Here’s how to tell: Take a piece of tape and rub the sticky side onto the surface. Then, yank it off. Really yank it. If some of the paint flakes off with the tape, you’ll need to sand down the old paint to remove anything the least bit loose. If a powdery substance comes off, you’ll need to wash the surface thoroughly before applying the new paint. And if the old paint was applied prior to the 1970s, it likely contains lead and the dust from lead paint can be dangerous to human health, so take all necessary precautions. In most cases, however, it’s a good idea to begin with a primer before you paint. 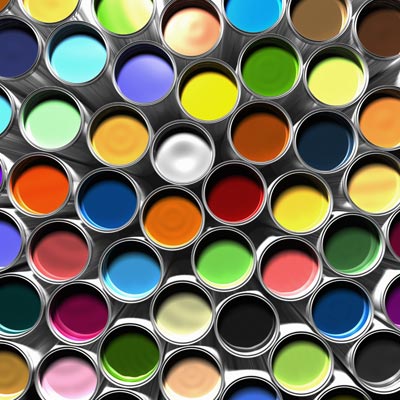 The type of primer you use all depends on the type of paint you use. Be sure to choose carefully to get the best possible outcome.
Ian Mckinnell/Photographer's Choice/Getty Images

Paint has three main ingredients: pigments to add color, binders to hold it together when dry, and liquid solvents or "carriers" (such as water or oil) to make the whole thing fluid enough to spread around or shoot through a nozzle. As the solvents evaporate, the binders, pigments and additives such as thickeners and fungicides remain.

In the past, paint with an oil-based solvent was considered the superior, most long-lasting product. But environmental concerns have put it in lesser favor at the same time science has made advances in latex paint technology. Water-based paint emits fewer toxic fumes, dries quickly, is flexible (less cracking) and, importantly, cleans up with water.

Professional house painters and artists may still favor oil-based paints and primers. Dan Gallagher, a decorative painter in Los Angeles, said "I would not use water-based primers over raw wood unless I had to. Manufacturers have reformulated water-based primers over in the past five years and although they claim these primers will block stains and wood knot bleeding, I have yet to really see it work."

Here's another way primer is like underwear: there are times when it's optional. For instance, when you cover a sturdy layer of existing paint with the same type of new paint, the primer is not so critical.

However, always use primer on these types of surfaces:

Even with abundant information available on paints and primers, experienced painters often seek advice from high-quality paint stores. You might consider doing the same. For now, you can get a lot more information from the links on the following page.