by the Editors of Publications International, Ltd. Apr 8, 2009 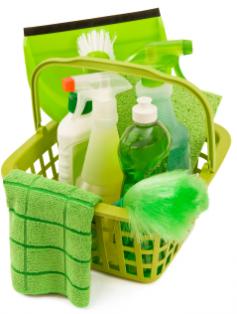 Keeping your home clean can be green, too.
­iStockphoto.com/Wendell Franks

Keeping your living space presentable and sanitary can sometimes feel like a daunting task -- it seems as if there are always more cleaning projects than time in the day! Day-to-day tidying is a must, not to mention those bigger cleaning projects (such as washing the windows or getting the dust out of the curtains) that must be tackled at least once a year.

­But don't despair! The Fantastic Four cleaners -- vinegar, salt, lemon juice, and baking soda -- can make your household tasks less complicated and easier on you and the environment. ­ While sometimes it may feel like you live in your kitchen, bathroom or bedroom exclusively, let's take a look around the rest of your home. It's time to grab your green cleaning kit and get cracking!

First up, learn how to clean glass and mirrors in an all-natural way.

­Forget ammonia-based window cleaners! The windows in your home can be effectively cleaned with 4 tablespoons lemon juice mixed with a half gallon of water. Other effective cleaners for glass and mirrors are rubbing alcohol and witch hazel.

­Another tip that old-fashioned household hint books often mention is that you can wipe windows clean with newspapers. While this may sound like a totally green idea -- after all, you'd be reusing newspapers and saving on paper towels -- the reality is that doing so is a messy and big waste of time. Try using a clean, lint-free rag instead, perhaps an old cotton T-shirt or cloth diaper.­ ­

Dipping a cloth in straight lemon juice and rubbing it onto the stained area can remove stains on vinyl items such as recliners or tile flooring.

Furniture polish remains high on our list of the Terrible Ten (including drain cleaners, over cleaners, toilet cleaners, spot removers, silver and other metal polishes, cleaners and powered cleaners, window cleaners, bleach, liquid cleaners) because polish is usually made of petroleum distillates and solvents, both of which are hazardous and, well, smelly. At the very least, they're both poisonous, so why keep them around when there are plenty of earth-friendly ways to polish your wood items?

One very effective wood polish sounds like it would be a good salad dressing as well: Just mix 2 parts olive oil with 1 part lemon juice and apply it to your furniture using a soft cloth. The combination gives your wood furniture a nice smell and a sparkling shine.

When a hot serving dish or glass of water has marred the surface of a wood table, you can quickly get rid of the mark by making a thin paste of salad oil or lemon oil and salt. Wipe the paste on, then lightly buff the area as you wipe it off with a soft cloth.

Whenever you have an indoor painting project, you can help control the smell of the paint by keeping small dishes of vinegar scattered about in the room. The vinegar will absorb the paint odor while you work. Leave the dishes out for a few days after finishing the project to keep the paint smell at bay. Remember to change the vinegar each day.

Metal polishes, such as those for brass, copper, stainless steel, and chrome, are also on our Terrible Ten list -- and for good reason. Most metal polishes contain ammonia and usually at least one type of acid, among other undisclosed ingredients. This is another area where it's a good idea to try greener methods first before plunging into the use of harsh commercial products.

Do you have tarnished copper or brass antiques? Give them loads of shine without doing any damage by bringing in salt and vinegar and adding one more ingredient from your kitchen cupboard: flour. Make a paste using equal parts of the three ingredients; rub the paste onto the brass or copper item with a soft cloth. Cover the entire surface and let the whole thing dry out (this will take about an hour). Wipe off the dried paste with a clean, soft cloth.

Lemon can also be used for lightly tarnished brass or copper pieces. Slice one lemon and dip it in salt, then rub the item with the salted lemon. Afterward, rinse and dry thoroughly.

Another fix for lightly tarnished copper is to use a spray bottle filled with undiluted vinegar. Just spray the copper piece and sprinkle the tarnished area with salt. Wipe thoroughly with a sponge or cotton cloth; be sure to remove all the salt, or the item will turn green. Repeat if necessary.

Because it is a soft metal and can be easily damaged, pewter must be given special care. To give your pewter items a refreshed glow, try this homemade, all-green cleaner: Mix 1 teaspoon salt and 1 cup vinegar. Add enough flour to the mixture to make a paste. Apply the paste using a soft cloth and allow itto dry for half an hour. Rinse the piece thoroughly with warm water and polish with another soft cloth. Make sure all the paste is removed from any grooves or hidden areas. ­

If your wood-burning fireplace has gathered soot and smoke smudges around its exterior, you can spruce it up by applying a paste of cream of tartar and water. Rub the paste into the stains, let it dry, then scrub it off.

If it's the inside of your fireplace and chimney you're worried about, you can help loosen soot buildup by tossing an occasional handful of salt into the fire the next time you're enjoying your fireplace. The burning salt will help loosen the soot a little, buying you some time between major cleanings.

It may sound overly simplistic, but one way to save time and energy on cleaning -- not to mention energy resources -- is to live in a smaller home. Too many of us are occupying more space than we really need. Over the past three decades, house sizes in the United States have been steadily growing. In 1970, new homes built in the United States averaged 1,500 square feet. In 2001, the average was more than 2,300 square feet, even though fewer people are living in each home (smaller families are the norm now, compared to the '70s).

If you're in the market for a new home, carefully consider how much space you really need. Most of us spend the bulk of our time in very few of our home's total rooms. Often we'll dedicate a room to one specific purpose (the sewing room, the guest room) only to have it sit idle, gathering dust for months on end. To make the most of your space, think "multiple use" when choosing or designing a home based on the number of rooms.

Several nonprofit organizations and trade groups dedicated to building smaller houses have sprung up to address the trend toward ever larger homes in the United States. In fact, they're being successful in some areas -- Los Angeles, California; Edina, Minnesota; Wellesley, Massachusetts; Atlanta, Georgia; and Austin, Texas, are among the cities that have recently considered setting an upper limit on house size in certain parts of their city, based on the theory that large houses are a huge drain on community resources. Developers have cried foul over these efforts -- every American has a right to own a Mega Mansion, after all -- but a case can be made about the drain on publicly controlled natural resources when homes are too large. If this sort of downsizing is of interest to you, here are some organizations to look into:

3. Passing the Clutter Around

Cleaning your home can also lead to a massive decluttering of your house. Often after a big cleaning binge, you may find that you've accumulated a small mountain of items that you don't need anymore. If any of it is reusable, you may want to consider joining an online community called Freecycle (www.freecycle.org), which has localized chapters of members who let each other know what stuff they have hanging around that they would like to give away -- anything from kitchen appliances, bicycles, and furniture to magazines, clothing, and diapers (unused, of course!).

The Freecycle community takes place entirely online, after you sign up to be a part of an e-mail group (also called a listserv). The groups are local even though Freecycle is a nation-wide program. It's a great way to declutter the house and provide somebody else with something they need -- all without the hassle of staging your own yard sale. Plus, moving around possessions already in existence is a way to prevent more goods from being manufactured or being dumped into a landfill.

Similarly, you might look into turning other outdated items over to charitable programs such as the DAV (Disabled American Veterans), Goodwill, or the Salvation Army. There are also organizations that will take your old electronics (such as computers and cell phones), your printer cartridges, your eyeglasses, and even your sneakers and distribute them to others who need them. A simple Internet search will offer many options to help you get rid of some of these items in your home.

2. Green Up the Inner Workings

You diligently clean your house daily or weekly as needed, perhaps also doing big cleaning projects twice a year. This is all well and good, but do you give your home's infrastructure a regular cleaning? Your heating and cooling air ducts should also be inspected and cleaned on a regular basis. If you've been in your home for a while and have never had your air ducts inspected, it may be time to do so. After all, the air that flows around your home affects your health as much as dirt and grime buildup!

The federal Environmental Protection Agency (EPA) recommends that a professional heating and cooling contractor inspect your home's air ducts and heating and cooling systems. If the contractor sees signs of mold, dust, dirt, and other contaminants, or if he or she notices a musty odor in the ductwork, having your ducts and systems cleaned will be recommended. If that's the case, you should consider hiring a professional duct cleaner -- this is probably not a job you can safely do on your own.

Your basic vinegar and water solution is really the perfect choice for cleaning most types of bare floors in your home. Mix up 1 cup vinegar with 1 gallon warm water (be sure it's warm!) and mop it onto a ceramic tile, linoleum, vinyl, or wood floor. There is no need to rinse afterward -- saving both time and water. If your vinyl or linoleum floor looks a little dull after cleaning, you can give it a shine by mopping it over again with straight club soda. Try not to saturate wood floors with the vinegar and water solution. Use a light touch; the mixture will make your floor shiny and remove any greasy buildup.