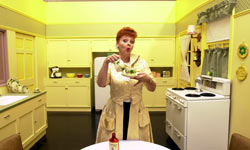 A Lucy Ricardo impersonator strikes a pose in a recreation of the impossibly clean kitchen set of “I Love Lucy” during an exhibition celebrating the 50th anniversary of the TV sitcom.
David McNew/Getty Images

Ah, TV. Who doesn't love the characters, the plots, the comedy, the drama, the way everything is resolved in an hour or a half hour, minus commercial time. Much has been written about the "unreality" of the characters' lives. How does that coffee shop waitress afford such a cool apartment in New York? How does the newspaper writer support his stay-at-home wife and six kids in that very large suburban house?

But here's something not written about as often: Who does the cleaning? You seldom see a TV character wielding a mop, broom or dust cloth on air. And yet the house or apartment he or she lives in always stays neat as a pin – even with a flock of children or a bunch of college students living there. Granted you might have the occasional maid on a show but even then you didn't see Florence on "The Jeffersons" or Teresa on "Dallas" doing all that much either.

So in the spirit of impossibility, we present the most unlikely clean homes on TV, starting with an all-time comedy favorite.