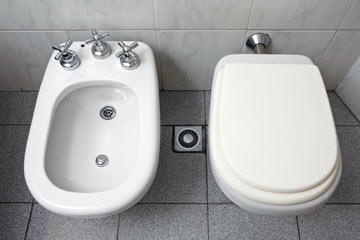 There is an environmental movement afoot to bring Americans up to speed with the rest of the bidet-loving world.
Hemera/Thinkstock

If you're an American, you probably aren't very familiar with bidets. You might have seen one in a movie (maybe during a hilarious scene in which a character mistakes a bidet for a drinking fountain) or stumbled across one in a fancy hotel room. But chances are you haven't actually attempted to use a bidet, and you most likely don't have one in your home.

But if you're from outside the United States, or have traveled internationally, you're probably quite familiar with the handy jetted appliance that cleanses your nether regions after you go to the bathroom. In the United States, bidets have somehow acquired a rep for being a comical accessory of the super-rich, but around the rest of the world quite the opposite is true; according to Treehugger.com, 60 percent of Japanese households and 90 percent of residences in Venezuela have a Washlet, a combination toilet/bidet made by Japanese firm Toto.

And yes, in case you're wondering, there is a movement afoot to bring Americans up to speed with the rest of the bidet-loving world. But because bidets have never been popular in the United States, "comeback" might not be quite the right word for it -- it's not like they were a hot item a few decades ago and have since fallen out of favor. But there's definitely a growing grassroots effort in support of the bidet, and it's coming from a perhaps surprising faction: environmentalists.

The bidet-backers do seem to have a point -- the toilet paper industry uses an astounding amount of energy. Treehugger says that 36.5 billion rolls of T.P. are produced each year (the equivalent of 15 million trees), which requires 473 billion gallons of water, 253,000 tons of chlorine and 17.3 terawatts of electricity -- and this is just in the United States. Bidets do use some energy, of course, but it's a drop in the bucket compared to toilet paper. So, the argument goes, the more Americans who buy bidets, the more trees that will be saved.

Contrary to what you might think, you don't have to spend a fortune -- or remodel your entire bathroom -- to install a bidet. If your bathroom is tight on space, the aforementioned Washlet is a tried-and-true option. There are also plenty of affordable bidet kits on the market that attach to your toilet and don't use any electricity or hot water. If you have money to burn, though, the sky's the limit -- there are bidets with remote controls, oscillating jets and warm air-dryers.

So -- have we inspired you to ride the bidet wave? Check out the links on the next page to learn more about them.

How to Clean Mold Off Clothing
How to Clean a Cutting Board
Commercial Break Cleaning: 10 Lightning-fast Fixes