How can you wash and dry clothes with steam?

How a Steam Washer Works 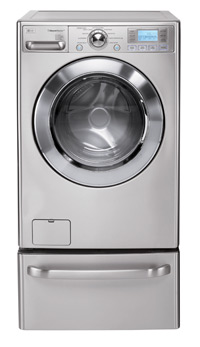 In a washing machine, steam and water form a dynamic duo. Steam complements water in the cleaning process by keeping the fabrics soft and wrinkle-free. One patent filed by LG Electronics, the company that put out the first home steam washer, explains the different advantages that steam can offer when applied in three different stages of a washing machine cycle:

The patent goes on to explain that when some fabrics get wet and hot, their very properties change. Although this state allows them to be thoroughly cleaned, it also means they may become hard and wrinkle. The penetrating steam post-wash phase counteracts this hardening.

Washing machines can apply steam in a few different ways. Though some heat the water in the tub directly to create steam, other models utilize a steam generator that heats up water in a separate compartment. After converting the water to steam, the steam generator sends the steam through a tube to a nozzle. The nozzle subsequently releases pure steam into the tub. Which method works best may depend on the model and your needs. If your clothes have tough stains, perhaps you should read the fine print to find which model gets the hottest.

Often, steam washing machines have options to add steam to normal cycles, in addition to the special cycles that already incorporate steam. But the user isn't tied to steam washing, which is good given that steam lengthens the cycle. Kenmore sells a steam washer that incorporates a self-cleaning steam option. Though many people don't think about cleaning washers themselves, the user manual recommends running this cycle once a month.

LG offers certain washers that are specially designed for those with severe allergies. These machines use what they call an "Allergiene" cycle that uses steam to sanitize fabrics of such things as dust mites and pet dander [source: LG]. It can do this because the high temperatures of the steam break up allergens effectively.

Steam washing machines use less power and consume less water than conventional models. A little bit of water can produce a lot of steam, which expands to take up more volume. Steam washers, then, don't need as much energy to heat as many gallons of water as other models.

But washers are only half of the story. Read on to find out how dryers may replace your drycleaning.

Getting slimed with suds?

Take note when you're purchasing a new washer whether it requires special high-efficiency (HE) detergent. Many of the new steam washers do, and using regular detergent will disrupt the machine's process and might cause over-sudsing.