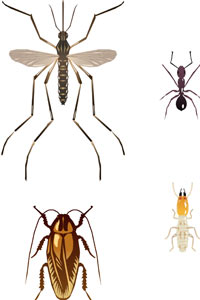 Our handy chart can help you figure this out. The ant is in the top right and the termite in the bottom right.
Hemera/Thinkstock

Termites and ants are two kinds of pests that you definitely don't want in your house. Even though these insects are two distinct species, it can be difficult to tell the difference between them. Ants and termites are small insects that both have six legs, a head, thorax and abdomen. Both types of insects vary widely in size. Some termites are tiny, while others are larger; the same goes with ants. Both termites and ants have queens that lay eggs and kings that fertilize them. In addition, both have a worker caste that does most of the work and a soldier caste that defends the nest.

Even though these bugs have a lot in common, if you know what to look for, you can tell the difference between them pretty easily. Termites have two pairs of wings that are of equal length. While ants also have two pairs, the wings in the front are larger than wings in back. Termites have straight antennae; ants' are elbowed. The waist area of a termite is thick, while an ant's is thin.

In addition to examining their bodies, you can also take a look at behaviors and the structures that they build to decide if you're dealing with ants or termites. Ants usually are easier to find than termites because they don't try to hide as much. That's because they live in holes or nests built from the earth that they dig out of the ground. These dwellings usually are visible and easily detectable. Termites don't build these structures, so if you notice piles of dirt, you probaly have ants. Ants will keep their shelter meticulously clean and dump debris in a pile away from the nest site. You can also see ants as they move in and out of cracks in concrete. And as is obvious to anyone who's left some crumbs on their kitchen floor, they'll eat just about anything – but not wood. They use that for housing.

Termites cause damage to your house becuase they consume wood rather than just live in it. In contrast to ants, termites stay hidden and often seal the entrance to the wood they have entered. Termites live in the soil and build tunnels in the ground to get to their feeding areas. While ants' vision allows them to be highly perceptive, worker termites are blind and find their way around by following passageways and pheromone trails.

Even though most people might think that a termite infestation is worse than an ant infestation, that isn't neccesarily the case. Whether they're eating wood or building a dwelling out of it, both insects can cause significant structural damage to your home. To rid you home of ants or termites, treat your home with an insectide specifically designed for the type of insect that your dealing with or call a professional pest control expert. Regardless of the insect you're dealing with, you'll want to get rid of it before it wreaks havoc in your house. Early detection and swift intervention will send both of these pests packing.