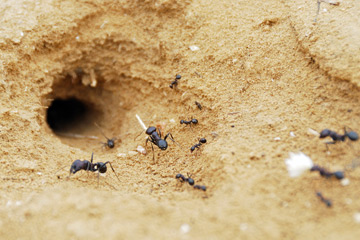 You'd be surprised by how deep this nest probably goes.
Hemera/Thinkstock

We witness ants at work virtually every day, but never pay much attention to where they come from. All ants live in colonies of nests, complicated systems of tunnels or rooms that house millions of ants. Each colony includes the Queen, who is responsible for laying all the eggs to grow the colony; female worker ants, who provide food for the Queen; soldier ants, who protect the Queen from outside enemies; and male ants, who mate with the Queen.

Ants can nest and develop colonies both within your home as well as outside, depending on the ant species. In theory, ants can be easy to track -- just follow their traveling path -- but in truth, it's difficult to actually find ant nests, since they're usually deeply buried within structures or underground.

Most ant nests are located outside the home. Who didn't kick in a couple of anthills found in the grass or sidewalk cracks when they were kids? But if you thought you were destroying an entire ant colony, you were mistaken. Ant nests develop very far underground, so disrupting what you see aboveground will not do much damage.

But while most ants are simply kitchen, bathroom and yard ants, there's one type of ant that can really ruin your day (not to mention, the structure of your house). Carpenter ant nests are often confused with termite nests, because they're both contained within the wood of homes. Carpenter ants don't actually eat the wood, but forming a nest requires the ants to chew and burrow into wood, causing severe damage. Carpenter ants prefer building nests in damp, damaged wood, including beams and foundations.

At the perimeter of your home, pavement ants build their nests along sides of garages and houses, or near any construction happening on concrete slabs. They enter dwellings through cracks in basement walls or concrete floors, or through basement windows and doors. It is possible for them to build their nest under a poured concrete slab if adequate access is found for movement.

Some ants have even learned to adapt their nests in certain weather. Pharaoh ants are a tropical species, and can't survive cold months outside. Over time, these ants have migrated all over the United States, even to cold areas where they build nests inside wall voids and behind kitchen baseboards and cabinets to keep warm.