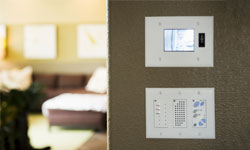 Burglar alarms have become standard equipment in stores and other businesses, and they're becoming increasingly common in private homes as well. If you've ever shopped for a home security system, then you know there are a wide variety of options available. These systems range from do-it-yourself kits you can pick up for $10 to sophisticated whole-house security networks that must be installed by professionals. But, as it turns out, most alarm systems are actually built around the same basic design concepts.

In this article, we'll take a look at these concepts and examine a few specific alarm designs. As you'll see, some of the most effective alarm systems are also the simplest.­

Other than the family dog, the most basic burglar alarm is a simple electric circuit built into an entry way. In any circuit, whether it's powering a flashlight or a computer, electricity only flows when you give it a path between two points of opposite charge. To turn the electricity on or off, you open or close part of the circuit.

To open or close a flashlight circuit, you simply throw a switch. In a burglar alarm, the switch detects the act of intrusion -- opening a door or window, for example. These sorts of alarms are divided into two categories:

There are a number of ways to build this sort of circuit into an entry way. Closed circuits are normally a better choice than open circuits because an intruder can deactivate the open circuit by simply cutting the connected wires.

A magnetic sensor in a closed circuit consists of a few simple components. For the most basic design, you need:

When the door is closed, the magnet pulls the metal switch closed so the circuit is complete. The current powers the relay's electromagnet, so the buzzer circuit stays open. When you move the magnet by opening the door, the spring snaps the switch back into the open position. This cuts off the current and closes the relay, sounding the alarm.

You can also build this sort of system into a window. If an intruder pushes a window open, the magnet slides out of line with the switch, and the buzzer is activated.

Another simple burglar alarm uses a small button as the switch. The button is embedded in the door frame, so closing the door pushes it in. When somebody opens the door, the button is released, changing the circuit and sounding the alarm.

With just a battery and buzzer, these designs make for fairly flawed security systems. After all, the burglar only needs to close the door again to turn the buzzer off. That's why most modern burglar alarms incorporate another piece into the circuit -- the control box.

The control box is hooked up to one or more alarm circuits, but it also has its own power supply. It monitors the circuits and sounds the alarm when they are closed or opened (depending on the design). But once the alarm is triggered, the control box won't cut it off until somebody enters a security code at a connected keypad. For added security, the control box is usually positioned in an out-of-the-way spot, so the intruder can't find it and attempt to destroy it.

Using this basic concept, you can create all sorts of alarm systems. Just imagine what a burglar might do to break into a house, and then turn that action into the circuit switch. For example, an intruder might break through a window, so you could make the glass itself a circuit. The easiest way to do this is run a current through a thin line of foil wire affixed to the surface of the glass. If a burglar breaks the glass, the circuit is broken, and the alarm is triggered.

Floor mats are another simple option. A basic floor mat uses an open circuit design with two metal strips spaced apart. When somebody steps on the mat, the pressure pushes the two metal strips together, completing a circuit.

All of these circuit systems are best for guarding the perimeter of a house or business -- the points an intruder would enter the building. In the next section, we'll look at systems that detect an intruder once he or she has already made it inside. 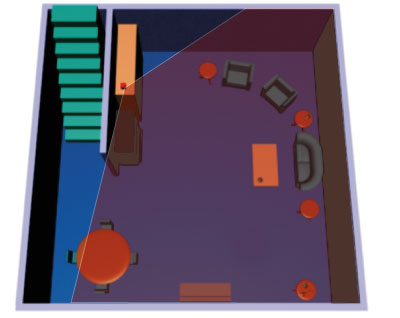 The motion detector emits radio energy into a room and monitors the reflection pattern.

Circuit alarms are very effective for guarding the perimeter of a house, but they don't work so well inside a building. This is because the intruder's actions are highly unpredictable -- you don't know where they'll go or what they'll touch. A specific "trigger" isn't very effective. To detect an intruder who's already in the house, you need a motion detector.

Basic motion detectors are fairly common these days. You see them all the time in automatic doors, for example. There are several different sorts of detectors.

An automatic door opener is an example of a radar-based motion detector. The box above the door sends out bursts of microwave radio energy (or ultrasonic sound waves), and then waits for the reflected energy to bounce back. If there is nobody in front of the door, the radio energy will bounce back in the same pattern. But if somebody enters the area, the reflection pattern is disturbed. When this happens, the sensor sends a signal and the door opens. In a security system, the sensor sends an alarm signal when the reflection pattern in a room is disturbed.

If somebody disturbs the reflection pattern, the motion detector sends an alarm signal to the control box.

Another simple design is a photo-sensor motion detector. These are the devices you might see in a store at a shopping mall. When somebody enters the store, the motion detector sounds a chime or bell. Photo-sensors have two components:

In a home security system, you aim the beam at the light sensor, across a passageway in your house. When somebody walks between the light source and the sensor, the path of the beam is blocked briefly. The sensor registers a drop in light levels and sends a signal to the control box.

More advanced security systems include passive infrared (PIR) motion detectors. These sensors "see" the infrared energy emitted by an intruder's body heat. When an intruder walks into the field of view of the detector, the sensor detects a sharp increase in infrared energy. Of course, there will always be gradual fluctuation of heat energy in an area, so PIR detectors are designed to trigger the alarm only when infrared energy levels change very rapidly. See this page for details.

All these motion detector designs can be combined in a house to offer complete coverage. In a typical security system, the control box will not sound the alarm immediately when the motion detectors are triggered. There is a short delay to give the homeowner time to enter a security code that turns the system off.

If the security code is not entered, however, the control box will activate various alarms. In the next section, we'll look at some of the alarm types you might find in a typical security system.

There are several things a security system might do when it detects an intruder. In an advanced system, the control box will be wired to several different components. Typically, it will activate:

The telephone auto-dialer can:

Home security is a rapidly growing field, and there are new and improved burglar alarms popping up all the time. For the most part, these systems are all built around the same basic structure. A central control box monitors several motion detectors and perimeter guards and sounds an alarm when any of them are triggered.

To find out about specific alarm devices and new installation techniques, check out the sites listed on the next page, or talk to a security system installer in your area.