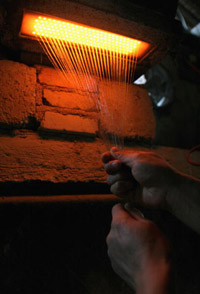 A worker pulls fiberglass straight as it is manufactured at a factory in Chengdu, Sichuan Province, China.
China Photos/Getty Images

If you've ever come in contact with fiberglass, you already know what it can do to your skin. The tiny fibers of glass from insulation wool can irritate your skin and eyes. If you experience too much contact with fiberglass, it can cause what's called irritant contact dermatitis, or inflammation of the skin. Breathing in fibers can also increase the difficulty of breathing. Is that the extent of the trouble fiberglass can cause, or are there more serious health effects?

Fiberglass became popular in the United States as another insulating material -- asbestos -- was phased out of use. Asbestos, unlike fiberglass, is a naturally occurring silicate material found in rocks. Its known use goes back to the ancient Greeks, who admired it for its ability to withstand very high temperatures. Indeed, asbestos isn't just resistant to heat. It also doesn't evaporate in the air, dissolve in water or react with most chemicals. All of these properties made it particularly attractive for home construction, and asbestos was the main material used for building insulation for the late 19th century and much of the 20th century.

But as early as the 1930s, the health hazards of asbestos became clear. When asbestos fibers are released into the air, they split into microscopic pieces. Once breathed in, asbestos fibers will be inhaled deep into the lungs, where they stay for long periods of time. During that time, the fibers irritate the lungs and any other part of the body they may travel to, disrupting cell division by interfering with chromosome distribution and changing important genetic material. This increases the chances of developing illnesses such as asbestosis, mesothelioma and other cancers, although symptoms of any such disease typically won't show up for 10 to 40 years. Asbestos is classified as a known human carcinogen by state, federal and international agencies, and new uses of the material were banned in 1989 by the Environmental Protection Agency. Still, we frequently see asbestos-related problems, from the evacuation of poorly constructed school buildings to debris created from Hurricane Katrina in New Orleans in 2005.

While asbestos is a natural material and fiberglass is man-made, the two materials are often compared because they're both fibrous. This quality made fiberglass a good substitute once the health effects of asbestos became apparent. It also has the heat-resistant qualities that made asbestos so desirable for insulation.

Rolls of natural cotton and recycled cotton prepared for use as an alternative to fiberglass insulation.
James Keyser/Time Life Pictures/Getty Images

It also has some worried that the fibers from fiberglass are just as dangerous as asbestos -- it's sometimes referred to negatively as "man-made asbestos" or the asbestos of the 20th century. But while early research on rats in the 1970s stated that "fibrous glass of small diameter is a potent carcinogen," more modern research isn’t as sweeping in its findings [source: Montague]. The American Conference of Governmental Industrial Hygienists, on the other hand, claims fiberglass is "Not Classifiable as a Human Carcinogen," meaning there isn't even data to say whether or not it causes cancer in people [source: Yeshiva University]. The U.S. National Toxicology Program issued its 13th Report on Carcinogens in fall of 2014, and while its entry on Certain Glass Wool Fibers (Inhalable) states that they are “reasonably anticipated to be human carcinogens,” it also goes on to say that there is so much variation in production that full assessments must be made on a case-by-case basis [source: NTP].

Fiberglass is generally considered safe when properly installed. Once it's installed, fiberglass rests safely between panels, sheetrock and plaster -- only when it's removed will fibers become airborne. In the meantime, people are still suggesting alternative ways to insulate homes -- everything including cork, corn cobs, cotton, newspapers and brick are other ways to keep the heat from escaping houses.

To learn more about house construction and related information, see the next page.