How to Protect Your Property from a Storm Surge 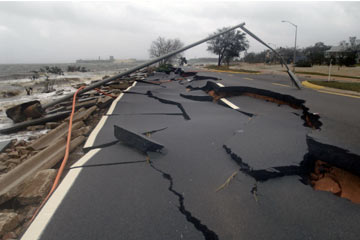 Long before satellites, radar and computer models could predict the track and intensity of hurricanes and tropical storms, there was Galveston. It was 1900, and the Gulf Coast Texas city was a sitting duck. Offshore spun a powerful hurricane with winds that exceeded 130 miles (209.21 kilometers) per hour.

The storm didn't have a name, because back then no one gave hurricanes names. Forecasting storms was more guesswork than science. Before racing through the Gulf on its way to Texas, it had hammered the Caribbean. The Weather Bureau, which at the time was responsible for issuing warnings of wild weather, had done so. As experts would later determine, "many didn't heed the warnings, preferring instead to watch the huge waves" [source: Britt].

In the end, those huge waves devastated Galveston. When the hurricane went ashore on Sept. 8, it crashed into the city. A storm surge of 8 to 15 feet (2.44 to 4.57 meters) swamped the island and other parts of the coast. Half of Galveston's homes were swept away. By the time the storm ended, between 8,000 and 12,000 people were dead [source: Britt].

When a hurricane hits, it's usually not the wind or rain that causes the most damage. The deadliest aspect of a hurricane is the storm surge. Storm surges form as a hurricane travels over warm water. As the hurricane sucks in moisture and heat from the water, it increases in strength. The storm's strong winds slam against the ocean surface, forcing water to pile up. This wall of water then moves toward the coast, gaining energy and strength as it travels. It can take hours for a surge to build. By the time the hurricane slams into the shore, the storm surge can be a towering behemoth, a wall of water sweeping away everything in its path [source: NBCNews.com].

What can humans do to protect their property against such devastation?

Is storm surge a man-made problem?

One hundred and five years after Galveston, another Gulf Coast community was ravaged by a hurricane. This time the city was New Orleans and the hurricane had a name: Katrina. New Orleans sits at the mouth of the Mississippi River at sea level, protected by a series of levees. The levees are supposed to hold back the ocean when a storm emerges. When Katrina barreled its way onshore on Sept. 29, 2005, the city had seemingly escaped the worst of the disaster. Then, the storm surge piled up offshore, eventually overwhelming the levees that protected the city.

The weak levees weren't the only things that allowed Katrina to drown the Big Easy. Over the decades, natural safeguards against rising water had eroded away. Coastal wetlands and the barrier islands that once protected New Orleans could no longer stop the flood of ocean water. Since the 1930s, Louisiana had lost more than 1.2 million acres (485,622 hectares) of wetlands. These wetlands had disappeared because the dams and the levees that protected the region against flooding trapped the sediment that Mother Nature uses to build wetland areas [source: Wade]. When Katrina struck, there was nothing to trip her up.

The same scenario is being played out across the world, as populations expand and search for new areas to inhabit. After the Great Midwest Flood of 1993 receded, experts determined that the restoration of 13 million acres (5.2 million hectares) of wetlands along the upper Mississippi-Missouri River watershed would have absorbed enough floodwater to reduce damage, which totaled some $16 billion. It would have cost $2 to $3 billion to repair the watershed [source: Wade].

Restoring ecosystems would do much to mitigate the impact of coastal storm surges. But is there anything homeowners can do to protect their property?

What You Can Do To Protect Your Property From Storm Surge 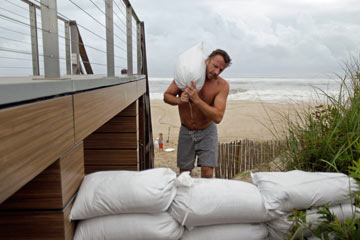 You can try to protect your home from storm surge with sandbags, like homeowner Marc Murphy (seen here) did in preparation for Hurricane Irene in August, 2011.
Joe Raedle/Getty Images

We've all seen the images. Perhaps you have been one of the millions who had to evacuate an area because of rising water. Maybe you lost your home when the water moved inland. Was there anything that you could have done to protect your property? Probably not.

Water goes where it wants to go. It can breach levees, pound dams into rubble and overwhelm seawalls. While it might seem that fighting a storm surge is a David and Goliath battle, there are steps you can take to minimize the impact of flooding. For one thing, you can try to protect your home's foundation with sandbags. You should place the sandbags not only around the foundation, but also near any vents or openings. You can also use aluminum or glass flood panels around vents [source: Lavernia and Smart].

Water will travel to the lowest available point. That's why basements flood. Basements are sort of like a bulwark against flood waters damaging the rest of the house. To a certain extent, the basement is meant to flood. If your neighborhood is prone to flooding of any type, you should elevate the furnace, water heater and electrical panel. Seal the basement walls with waterproof compounds. Install backflow plugs and valves to prevent water from getting into the rest of the home. These devices can stop toilets, shower stalls, baths and sinks from becoming geysers of fetid water. Also, know how to turn off the electricity and other utilities [source: Willis].

And know your property. Are you in an area that is prone to storm-surge damage? Have your neighbors experienced such flooding in the past? If you live in a storm-surge zone, be prepared. Storm surges can strike at any time. Know the evacuation route. Know how to contact family members. Make sure the basement windows are closed and your car is fueled. Keep an inventory of all your property. Make sure you have everything you need in an emergency supply kit. Include changes of clothes, battery-powered radios, batteries and flashlights [source: Public Safety Emergency Preparedness Canada].

Perhaps the best thing you can do to protect your property from flooding of any type is to buy flood insurance. Storm surge flooding is not covered by most homeowner's policies. The wrath of Mother Nature is powerful, but there are things you can do to fight back.

There isn't much you can do when a storm surge strikes. The best advice the experts give is to prepare yourself for the worse, and evacuate when there's time. Homes and belongings can be replaced. Lives cannot.

10 Must-haves in a Storm Survival Kit
How to Prepare for a Hurricane
How do I build a hurricane shelter?

10 Ways to Break Into a House
How to Test For Toxic Mold
How do indoor air quality standards keep us safe?