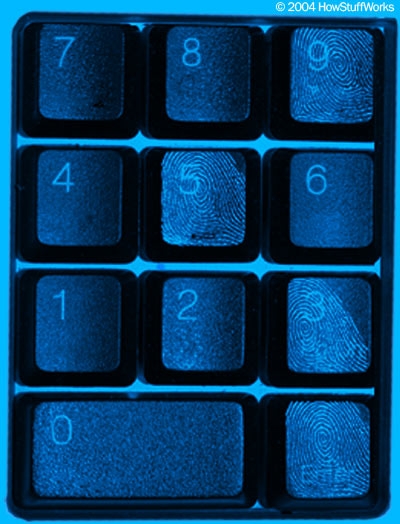 Ultraviolet fingerprints provide a trail for the safecracker to follow.

At a certain temperature, all metals will burn. There is nothing safe manufacturers can do about that. Safecrackers can use methods of burning to create a hole in the side of a safe large enough to remove its contents. Safecrackers accomplish this by using a variety of torches. Oxy-acetylene torches can operate at temperatures of up to 4500 F, but that isn't hot enough to bore through the side of a large safe in a timely manner. So, what's a safecracker facing a really large safe to do?

Plasma cutters and thermic lances are both capable of creating enough heat to burn through a large safe. These tools are quickly replacing the oxy-acetylene torch as the tool of choice for safe burning. In either case, the safecracker uses the heating instrument to bore holes into the safe either exposing the lock mechanism or the contents of the safe. The downside of safe burning is the large amount of heat and smoke produced by the process. Also, both plasma cutters and thermic lances are expensive and take skill to operate properly.

Click the On/Off switch to watch a plasma cutter in action.

Another popular method of safecracking is to use explosives. This method is high on success and low on discretion. But so long as the burglar knows the contents of the safe can survive the explosion and that he can escape after the explosion has alarmed authorities, this method is quick and effective.

Safecrackers use jam shots to blow the doors off of safes. Jam shots use nitroglycerin as the explosive. Nitroglycerin [C3H5(ONO2)3] is a mixture of glycerin, nitric and sulfuric acids. This highly explosive concoction, often referred to as "grease," takes the form of a jelly-like substance.

To use a jam shot, the safecracker needs:

In addition to nitroglycerin, C-4, PETN, or RDX are all used by professional safecrackers to blow open a safe. Though harder to come by, the advantage of these explosives is that they come in castable clay-like forms that are much easier and safer to use than nitroglycerin.

Electronic locks are becoming more and more prevalent in the construction and design of modern safes. This is especially true in commercial safes. The electronic lock offers many improvements and enhanced security. It allows for combinations of more possible number groupings, personalized combinations assigned to different users, as well as the ability to log all records of entry -- tagging the entry to a user by recording what combination was used to open the safe.

Leaps in technology have only slowed the modern safecracker but not stopped him. The most common way to bypass an electronic lock is by acquiring the combination through means of coercion or computer hacking. Another successful method for bypassing a keypad-style electronic lock is for the safecracker to cover objects housed in the same building as the target safe with ultraviolet ink. During the course of the day, the safe owner will touch ink-covered objects such as doorknobs or handrails before opening the safe. After the safe owner punches in the code with the ultraviolet ink residue on his fingers, the burglar need only return later and shine a black light on the keypad to discover which keys were pressed. A detective's fingerprint dusting kit can also reveal the most commonly pushed keys.

Worthy of a James Bond film, another more high-tech method of safecracking utilizes software developed by JD Hamilton of the Mas-Hamilton Group. This software and many of its clones can interface with the lock at its programming port using a wireless connection. The software, when run on a high powered laptop, will simply run a sequence of numbers until it hits the right combination. However, the cost of the software and hardware is often greater than the contents of most safes. This method is more likely to be used in industrial or political espionage. U.S. government agencies are currently studying this software to create effective countermeasures.

Don't Try This at Home

Even armed with the right knowledge and tools to do it, safecracking is a highly risky crime that carries severe penalties under law. The risks alone are enough to deter most thieves. That is why safecracking remains one of the rarest crimes. Most skilled safecrackers use their abilities under the shingle of a locksmith or other authority for legitimate reasons. They also help safe manufactures test their designs. To this day, the contents of safes are more often lost to fire rather than burglary.

For more information on safecracking and related topics, check out the links below.

These are some sources that we found useful in researching this article: