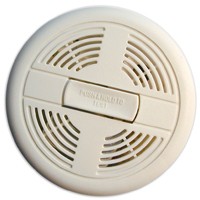 ­Smoke detectors are one of those amazing inventions that, because of mass production, cost practically nothing. You can get a smoke detector for as little as $7. And while they cost very little, smoke d­etectors save thousands of lives each year. In fact,it is recommended that every home have one smoke detector per floor.

All smoke detectors consist of two basic parts: a sensor to sense the smoke and a very loud electronic horn to wake people up. Smoke detectors can run off of a 9-volt battery or 120-volt house current.

Occasionally, you will walk into a store and a bell will go off as you cross the threshold. If you look, you will often notice that a photo beam detector is being used. Near the door on one side of the store is a light (either a white light and a lens or a low-power laser), and on the other side is a photodetector that can "see" the light.

When you cross the beam of light, you block it. The photodetector senses the lack of light and triggers a bell. You can imagine how this same type of sensor could act as a smoke detector. If it ever got smoky enough in the store to block the light beam sufficiently, the bell would go off. But there are two problems here:

Photoelectric smoke detectors therefore use light in a different way. Inside the smoke detector there is a light and a sensor, but they are positioned at 90-degree angles to one another, like this:

In the normal case, the light from the light source on the left shoots straight across and misses the sensor. When smoke enters the chamber, however, the smoke particles scatter the light and some amount of light hits the sensor:

The sensor then sets off the horn in the smoke detector.

Photoelectric detectors are better at sensing smoky fires, such as a smoldering mattress.

Ionization smoke detectors use an ionization chamber and a source of ionizing radiation to detect smoke. This type of smoke detector is more common because it is inexpensive and better at detecting the smaller amounts of smoke produced by flaming fires.

Inside an ionization detector is a small amount (perhaps 1/5000th of a gram) of americium-241. The radioactive element americium has a half-life of 432 years, and is a good source of alpha particles.

Another way to talk about the amount of americium in the detector is to say that a typical detector contains 0.9 microcurie of americium-241. A curie is a unit of measure for nuclear material. If you are holding a curie of something in your hand, you are holding an amount of material that undergoes 37,000,000,000 nuclear transformations per second. Generally, that means that 37 billion atoms in the sample are decaying and emitting a particle of nuclear radiation (such as an alpha particle) per second. One gram of of the element radium generates approximately 1 curie of activity (Marie Curie, the woman after whom the curie is named, did much of her research using radium).

(For an extensive explanation of nuclear materials and nuclear radiation, see How Nuclear Radiation Works.)

Let's take a look now at the ionization chamber.

An ionization chamber is very simple. It consists of two plates with a voltage across them, along with a radioactive source of ionizing radiation, like this:

The alpha particles generated by the americium have the following property: They ionize the oxygen and nitrogen atoms of the air in the chamber. To "ionize" means to "knock an electron off of." When you knock an electron off of an atom, you end up with a free electron (with a negative charge) and an atom missing one electron (with a positive charge). The negative electron is attracted to the plate with a positive voltage, and the positive atom is attracted to the plate with a negative voltage (opposites attract, just like with magnets). The electronics in the smoke detector sense the small amount of electrical current that these electrons and ions moving toward the plates represent.

When smoke enters the ionization chamber, it disrupts this current -- the smoke particles attach to the ions and neutralize them. The smoke detector senses the drop in current between the plates and sets off the horn.

Speaking of alarms, whenever the words "nuclear radiation" are used an alarm goes off in many people's minds. The amount of radiation in a smoke detector is extremely small. It is also predominantly alpha radiation. Alpha radiation cannot penetrate a sheet of paper, and it is blocked by several centimeters of air. The americium in the smoke detector could only pose a danger if you were to inhale it. Therefore, you do not want to be playing with the americium in a smoke detector, poking at it, or disturbing it in any way, because you don't want it to become airborne. See How Nuclear Radiation Works for further details.

Now, let's take a look inside an ionization smoke detector. 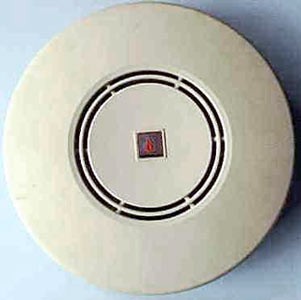 Here's what the outside of a typical smoke detector looks like.

When you take off the cover, you find that a smoke detector is pretty simple. This one consists of a printed circuit board (see the article Inside a Remote Control for an explanation of printed circuit boards), an ionization chamber (the silver cylinder toward the top right in the following picture) and an electronic horn (the brass cylinder toward the bottom right in the following picture):

Here is a close-up of the board:

and the underside of the board:

Underneath the can is a ceramic holder that contains the positive plate of the ionization chamber. Under that plate is the ionization source, WHICH YOU WANT TO BE SURE NOT TO DISTURB.

For more information on smoke detectors and related topics, check out the links on the next page.

Is there a way to keep floodwaters out of my house?
How can copper keep termites at bay?
How do indoor air quality standards keep us safe?