How to Repair Plumbing Pipes 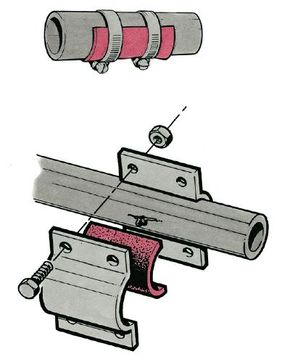 Most plumbing problems occur at or near such fixtures as sinks, tubs, and toilets. Sometimes, however, the pipes themselves are the root of the problem. Pipes can be temperamental -- they can leak, sweat, freeze, or make loud noises. In the following article, we'll tell you how to deal with all of these difficulties. We'll begin in this section by addressing leaking, sweating, and frozen pipes.

There are all kinds of plumbing leaks. Some can flood your home, while others are not nearly so damaging. Your approach to stopping a leak depends on the type of leak it is. If the leak is at a joint, tighten the joint. If the leak is in a pipe, remove the section that is leaking and replace it with a new section. Unfortunately, this is more easily said than done. For example, when you turn a threaded galvanized steel pipe to unscrew it from its fitting at one end, you tighten the pipe into its fitting at the other end. With copper pipe, the new section must be sweat-soldered in place. Most pipe replacement jobs are best left to a plumber, but, as a do-it-yourselfer, you may consider an alternative: the pipe patch.

You'll find patch kits for plumbing leaks at the hardware store, or you can make your own with a piece of heavy rubber from an old inner tube and a C-clamp. Another possibility is to use a hose clamp with a rubber patch. Factory-made kits contain a rubber pad that goes over the hole in the pipe and metal plates that compress the rubber pad over the hole. A quick and easy way to stop a leak, the patch kit can even be used on a permanent basis if the pipe is otherwise sound.

A Guide to Pipe Problems

Whether it's all sorts of strange noises or annoying leaks, there are many reasons why pipes may be posing problems. Click here for a pipe troubleshooting guide.

How to Quiet Noisy Pipes 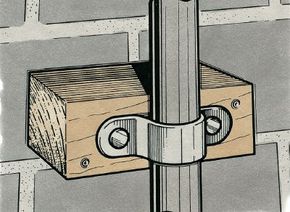 ©2006 Publications International, Ltd. A pipe banging against a masonry wall can be silenced by wedging a wood blockbehind it, fastening the block to the wall, and securing the pipe to the wood.

The sound of banging pipes is sometimes called water hammer, but water hammer is only one of several different noises that can come from your plumbing system. If you hear the sound whenever you turn on the water, the pipes are probably striking against something.

Water hammer is a specific plumbing noise, not a generic name for pipe clatter. It occurs when you shut off the water suddenly and the fast-moving water rushing through the pipe is brought to a quick halt, creating a sort of shock wave and a hammering noise. Plumbing that's properly installed has air chambers, or cushions, that compress when the shock wave hits, softening the blow and preventing this hammering. The chambers can fail, though, because water under pressure gradually absorbs the air.

©2006 Publications International, Ltd. An air chamber will not drainproperly if it is clogged. Removeits cap and ream out theaccumulated scale insidethe chamber.

If you never had hammering and then it suddenly starts, most likely your plumbing system's air chambers have become waterlogged. You can cure water hammer by turning off the water behind the waterlogged chamber, opening the offending faucet and permitting the faucet to drain thoroughly. Once all the water drains from the chamber, air will fill it again and restore the cushion. If the air chamber is located below the outlet, you may have to drain the main supply lines to allow the chamber to fill with air again.

The air chamber will not drain properly if it's clogged with scale or residue from chemicals or minerals in the water. The chamber always should be larger than the supply pipe to preclude such clogging. Since the chamber is simply a capped length of pipe, however, all you have to do to clear it is remove the cap and clean out the residue.

What do you do if there are no air chambers built into your plumbing system? You must do something, because water hammer pressures may eventually cause damage: failure of fittings or burst pipes, for example. Because water hammer is most often caused by water pressure that's too high, the first step is to reduce the water pressure if possible. Sometimes this isn't feasible because a reduction in pressure may result in only a dribble of water at an upper-floor faucet if one on the first floor is turned on.

Where the idea is a workable one, you can reduce pressure by installing a pressure-reducing valve in the supply line that comes into the house. The same purpose is served by installing a globe valve at the head of the affected pipeline. But this too may result in pressure too low for proper operation when other faucets are open.

If pressure reduction is not feasible or is ineffective, install the necessary air chambers to prevent water hammer. If you have no room to make the installation without tearing into a wall, go to a plumbing supply dealer and find out about the substitute devices designed for such problem areas. Many of these devices have a valve that makes it easy for air to re-enter the system.

The next time you hear noises or clatter coming from your home's plumbing system, try the solutions mentioned in this article. The same goes for leaking, sweating, or frozen pipes. If you try to solve the problem right away, you can prevent it from becoming more serious.