How to Repair Toilet Tank Problems 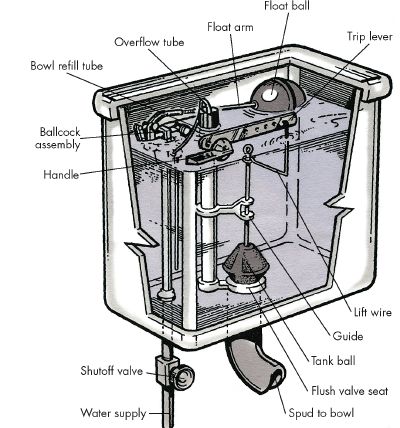 ©2006 Publications International, Ltd.Toilet tank troubles are both common and annoying, and they could be costing you money in wasted water. Most problems, however, can be eliminated easily. This is a cross section of a typical toilet tank and its components.

Compared with a clogged toilet, tank troubles can seem relatively insignificant. Yet strange noises or continuous water running can be more than annoying; it can cost you money in wasted water. Fortunately, you can eliminate most tank troubles quickly and easily.

Once you know how the toilet works, you can start to look for the source of your toilet tank problems. First, lift the lid off your toilet tank. When you trip the handle on the tank to flush the toilet, a trip lever is raised inside the tank. This lever lifts wires, which, in turn, raise the tank ball or rubber flap at the bottom of the tank. When the flush valve opening is clear, the water in the tank rushes out past the raised tank ball and into the toilet bowl below. This raises the level of water in the bowl above the level of water in the toilet trap.While the water is rushing out of the tank, the float ball, which floats on top of the water in the tank, drops down. This pulls down on the float arm, raising the valve plunger in the ballcock assembly and allowing fresh water to flow into the tank. Since water seeks its own level, the water from the tank pushes the bowl water out into the drain, causing a siphoning action that cleans everything out of the bowl. When all the water is gone from the toilet bowl and air is drawn into the trap, the siphoning stops. Meanwhile, the tank ball falls back into place, closing the flush valve opening.

As the water level rises in the tank, the float ball rises until the float arm is high enough to lower the valve plunger in the ballcock assembly and shut off the incoming water. If the water fails to shut off, there is an overflow tube that carries excess water down into the bowl to prevent the tank from overflowing. Once you know how a toilet properly works, you are ready to solve common problems like water constantly running or strange noises coming from the tank. Find out specific steps to solve these problems in the next section.

Here are the tools you'll want to have on hand to make toilet tank repairs: