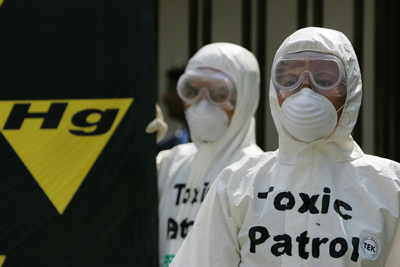 PVC has come under protests from a number of organizations in a number of countries, like India (above).
Manpreet Romana/AFP/Getty Images

Polyvinyl chloride seems like it's everywhere. In one way, it’s a miracle compound. It provides tools healthcare professionals need to work cheaply and effectively. It’s created safer cars through softer dashboards that can cushion an impact during a wreck. And PVC has made modern life more affordable, with its use in inexpensive consumer goods. Thanks to PVC, life has become more convenient. But some groups say that this convenience comes with a price.

The Center for Health, Environment and Justice, a non-profit organization based in New York, calls polyvinyl chloride “one of the most hazardous consumer products ever created” [source: CHEJ]. This group has launched a publicity campaign against the production of polyvinyl chloride, called “PVC: Poison Plastic,” and produced a 2004 study, “Bad News Comes in Threes.” The “Threes” references the number three found within the recycling symbol on some products, which identifies those products as being made of PVC.

But just what exactly is so bad that it could be thought of as such a hazard? Sure, burning vinyl is a problem, but how likely is your house to go up in flames? Actually, burning vinyl siding isn’t the only hazard associated with PVC. And it’s not just fire that makes it hazardous. According to the CHEJ, the entire lifespan of the PVC material is harmful.

The production of PVC requires a series of chemical reactions. Each step releases waste byproducts, which may enter the atmosphere, groundwater and soil. Manufacturing chlorine produces other chemicals, like dioxins, which have been shown to cause cancer. Some of these waste byproducts are also sent to landfills by companies that produce PVC and its building blocks.

The jury’s still out as far as what kind of effects PVC products have on consumers. Testing on lab animals has shown negative effects, such as hindering healthy development of the reproductive system. But testing on humans has not been conclusively researched. Still, a report by the U.S. Food and Drug Administration says that even though reports of similar harmful effects on humans by phthalamites -- those softening ingredients -- “there have been no studies to rule them out” [source: FDA]. The PVC industry declares its products safe, but products containing phthalamites were banned in toys for children under age three by the European Union in 1999.

Perhaps the biggest problem associated with PVC products is found at the end of their life span. PVC products can’t be incinerated (or at least they shouldn’t be), and their introduction into landfills poses a threat, as well. As PVC products break down, the lead, mercury, phthalamites and chlorine involved in their creation can leak into groundwater, eventually making it into a water supply.

Even recycling PVC products is problematic. Reconstituting PVC products into new ones is considered difficult and uneconomical. PVC is created from chlorine through chemical processes, but it isn’t recycled easily. “There are clearly very finite limits to what [PVC products] can be recycled,” states a report cited by the activist organization Greenpeace.

The PVC industry is facing great challenges. Companies are beginning to discontinue the use of PVC packaging, and others are stopping use of PVC altogether. It appears that the plastic may be reaching the end of its own life cycle. The trouble is, that’s not going do much about the PVC that has already been created.

Learn more about plastics, recycling and other related topics below.