How to Repair a Refrigerator 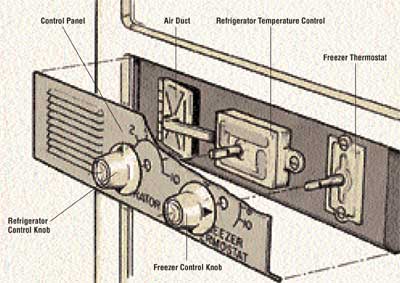 Thermostat controls regulate the temperature of the refrigerator and freezer. Remove the control panel to reach the controls.
©2006 Publications International, Ltd.

The inner-workings of a refrigerator can be a mixed bag. Some components are fairly easy to service or repair, while others should only be handled by professionals.

Step 2: If the compressor runs after the wire is removed from its terminal, there is probably a short circuit somewhere in the unit's wiring. In this case, don't try to fix the problem yourself; call a professional service person.

Step 4: If the freezer compartment is normal but the refrigerator box doesn't cool, set the dials that control both compartments to mid-range. Remove these knobs (they're usually friction-fit). Then unscrew the temperature control housing; you'll see an air duct near the control. Replace the knob on the freezer thermostat and turn the control to the OFF position. Open the refrigerator door and look closely at the air duct. If this duct doesn't open wider in about ten minutes, the control is faulty. Replace the control with a new one of the same type. Connect the new control the same way the old one was connected.

In some cases, a faulty thermostat may not be the cause of a warm refrigerator or freezer. A warm box may also be caused by a defective fan, a blocked fan, or broken or bent fan blades. If the blades are jammed, try to free them. If they're bent, straighten them with pliers. If this doesn't solve the problem, call a professional service person.

On some refrigerators, the door switch operates the evaporator fan. If the fan seems to be malfunctioning, the door switch could be faulty. Test the switch as detailed in the last page, and replace it if necessary.