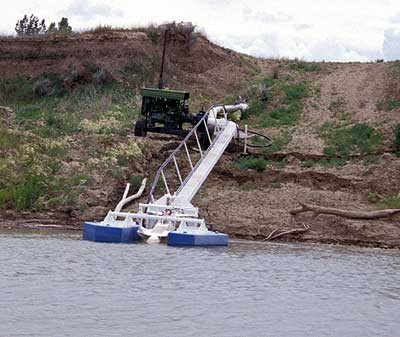 Because the water level of the river varies, farmers along the Missouri River use floating pumps like this one to collect irrigation water.
Photo courtesy USDA ARS

­­Surface irrigation is arguably the least complex form of irrigation. At its simpl­est, no attempt is made to stop fields from naturally flooding. In general, this is only suitable in situations where the crop is of little value, or where the field will be used only for grazing or even recreation. Of course, while this method is simple and easy, it is totally dependent upon a suitable water source.

A more refined variation, though still reliant on a plentiful supply of water, is basin irrigation. Closely-spaced crops with deep roots are particularly suited to this method, and the growing of rice in paddy fields is an example familiar to most of us. The basin referred to is simply a field, enclosed with a raised bank, or dike, to contain the water. The water is directed into the field by various channels and pipelines, or may even be brought in manually. Two extremely old methods use these devices:

­By whatever method, the water is transported to the channels where it floods the field, causing a deep layer of mud to form in the bottom of the basin. In the case of rice, fresh seedlings are planted in this rich and fertile mud, and in September or October the mature rice is harvested, dried and stored.

Border irrigation is similar, but in this case the field is not entirely enclosed by a dike. Instead, it is watered from one end and allowed to drain from the other. Border irrigation works well with sloping land, as does furrow irrigation, in which the water is further controlled by the use of channels within the field itself. Water is directed along these channels, and by controlling the flow of water into each channel, the farmer can control the amount of water in different portions of the field surface.

Special furrow systems like these enhance water management. Wide-spaced furrows work like alternative-row irrigation, except that every row is irrigated and the rows are further apart.
Photo courtesy USDA ERS

Next, we'll find out about overhead irrigation methods.