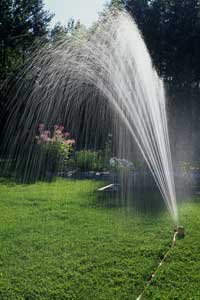 Up to half of household water usage comes from landscaping.
Wally Eberhart/Getty Images

­Do you drink the recommended eight glasses of water per day to keep your body and skin healthy? If so, that's only 0.5 percent of the 100 gallons (378 liters) -- or 1,600 glasses -- of water the average American drains every day [source: EPA]. In developing countries, potable water is a scarce resource, available to less than a third of the population [source: UNICEF]. On top of that, humans can utilize only 1 percent of the Earth's water, and global water usage has tripled in the past 50 years [source: EPA].

Widespread drought conditions in the United States, as well as heightened eco-consciousness, have spurred federal, state and municipal governments to tighten the reigns on people's water consumption. At least 36 states anticipate water shortages by 2013 [source: EPA]. In response, governmental and environmental organizations have raised awareness about how we waste water and ways to conserve. For instance, things you do indoors, such as running dishwashers or washing machines without full loads or taking long showers can squander gallons. But if you want to reduce your water expenditures significantly, take a walk outside as well.

­In drier climates, up to 50 percent of household water use comes from landscaping [source: Walsh]. Americans drench their  l­awns with an estimated 7 billion gallons (26.4 billion liters) of water every year [source: EPA]. Maintaining a green lawn or perky flower beds may beautify your yard, but few people do it efficiently. You turn on a sprinkler system for a couple of hours without noticing that it waters your asphalt driveway half the time. Or maybe you hose down your garden in the hottest part of the day. Correcting these eco-sins can chop your household water consumption by as much as 60 percent -- not to mention how much you'll save on your water bill.

If that isn't enough to entice you to change your water-wasting ways, consider this. Your lawn and gardens don't have to suffer from conservation. In fact, you can grow healthier, more vibrant plants with less water. People actually tend to overwater their plants during the growing season, which can cause more damage than extreme drought. Water-friendly gardening may require sacrificing some lawn space, but you'll reap extra time and money in the process. 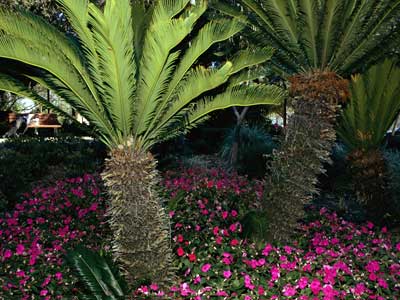 ­Water-friendly gardens don't happen without a bit foresight and planning. Sure, you can leave your yard as is and implement more efficient watering practices, but to really make an impact, you may have to face the winds of change. First and foremost, consider losing the lawn. As tidy as turfgrass lawns appear, they're environmental nightmares. They demand as much as 90 percent m­ore watering than native plant gardens, need harsh fertilizers and pesticides that pollute groundwater and provide no additional food or habitat for birds and animals.

You don't have to dig up your entire lawn, but you can downsize it. Take into account the purpose of the grassy areas. Do they remain relatively untouched, or are they places for entertaining and exercise? If you never step on your grass except to mow, you might not miss it. In that case, replace turfgrass with native plants that require far fewer resources to thrive. Converting a 1,000-square foot (92.9-square meter) lawn into a native plant garden can save 24,000 gallons (90,849 liters) of water per year [source: Rubin]. These types of plants (including trees, shrubs, grasses and flowers) are indigenous to where you live and can naturally withstand climate extremes and rainfall.

Aesthetically, planting varieties of native plants closely together leaves less room for weeds and creates a vibrant display of colors and textures. The money that you invest into altering your lawn into a native garden will lower your upkeep expenses in the long run as well.

Integrating native plants into landscapes is a cornerstone of Xeriscaping. As described in How Xeriscaping Works, this type of landscaping strategically arranges drought-resistant and native plants to maximize water uptake. One of the methods involved is called hydrozoning. When hydrozoning plants, you cluster moisture-needy plants near the watering source. You then place the xeric, or water-hardy, plants on the outskirts of the bed to capture any runoff [source: Torpey]. Xeric plants can grow with less water thanks to their narrow leaves that reduce transpiration, or the release of water vapor. Their fleshy stems also draw moisture from soil more efficiently [source: USDA]. Nevada, a particularly drought-plagued state, has incentivized Xeriscaping because of its water sipping benefits. The Southern Nevada Water Authority in Las Vegas pays residents $1.50 for every square foot of turf grass replaced with Xeriscape [source: Esswein].

Once your plants are in the ground, add a thick layer of mulch on top. Mulch refers to any insulating material you put on the soil to protect and nourish your plants and preserve soil integrity; for example, it could be wood chips, compost, or rocks. When trying to conserve water in your garden, mulch is one of your best friends. It reduces evaporation, holds water in place to prevent runoff and lowers the soil temperature for better root absorption [source: Lamp'l.

Now, it's time to water.

How to Water without Waste: Watering Efficiently

In Austin, Texas, as well as a growing number of other cities, it pays to save water. And we aren't talking about turning off the spigot; we mean actually preserving the water that falls from the sky. Austin's city government set up a program to reimburse residents up to $500 for installing large-capacity rainwater harvest systems. A rainwater harvest system sounds complicated, but it's just a technical term for catching and reusing rainwater. Instead of running the pipes from your roof gutters to the ground, you direct them into a rain bar­rel. In Austin, where the average rainfall is 32 inches (81 centimeters), a 2,500-square foot (232-square meter) roof can collect 45,000 gallons (170,343 liters) of water potentially in one year [source: Austin Energy Green Building Program]. Rainier areas can collect even more from smaller roofs.

Depending on your location, your rain barrels might not get much love from Mother Nature during the warmer months. With a number of states, including parts of Georgia, Texas and California, experiencing significant drought, your parched lawn and garden may need supplemental irrigation.

Whether you're spraying city water or rainwater, the time of day you turn on the hose makes a significant impact on efficiency. If you water during the high heat of the day, up to 30 percent of everything that exits the spout will evaporate before it feeds the plant [source: Lamp'l]. Resist the urge to water when you look outside at lunchtime and see your petunias drooping sadly. Some plants wilt temporarily when the sun beats down, then stand erect once it eases off. That said, you should water only early in the morning or late in the afternoon to maximize the amount of water that reaches the soil. Also, avoid dousing the flowers and foliage. It does little good since the water evaporates prior to getting to the root system. Instead, hold the spout close to the ground.

If your garden needs more sustained water, drip irrigation systems are the least wasteful. Long, thin tubing runs on the ground along the rows of plants. Water rushes through the piping and drips out of holes situated at the individual plants. That method targets where the water goes more than overhead sprinkler systems and lessens evaporation. The irrigation pipes can also easily hook up to rain barrels.

Beware of overzealous watering, however. Giving your plants a gulp, rather than a drink, of water can hurt them more than no water at all [source: University of Massachusetts Extension]. Too much water chokes the roots and starves the plant. When you don't know how much is enough, stop and allow the water to soak into the soil for a few minutes. Poke your finger in the dirt, and if it still feels dry, keep going. Otherwise, remember that when properly applied, a little water goes a long way toward a beautiful landscape.

Haven't quenched your thirst for gardening knowledge? Click on the next page for more helpful resources.

Recycle Inside Water Outside­

Gray water reclamation offers another possibility for free, no-impact irrigation. We refer to the household wastewater from the dishwasher, washing machine and shower as gray water. Collecting it can be as simple as scooping out used bathwater with a bucket or saving the old water in Fido's bowl before refreshing it.