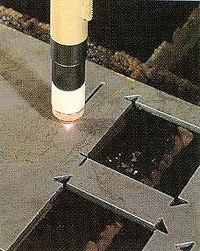 Modern industry depends on the manipulation of heavy metal and alloys: We need metals to build the tools and transportation necessary for day-to-day business. For example, we build cranes, cars, skyscrapers, robots, and suspension bridges out of precisely formed metal components. The reason is simple: Metals are extremely strong and durable, so they're the logical choice for most things that need to be especially big, especially sturdy, or both.

The funny thing is that metal's strength is also a weakness: Because metal is so good at resisting damage,­ it's very difficult to manipulate and form into specialized pieces. So how do people precisely cut and manipulate the metals needed to build something as large and as strong as an airplane wing? In most cases, the answer is the plasma cutter. It may sound like something out of a sci-fi novel, but the plasma cutter is actually a common tool that has been around since World War II.

Conceptually, a plasma cutter is extremely simple. It gets the job done by harnessing one of the most prevalent states of matter in the visible universe. In this article, we'll cut through the mystery surrounding the plasma cutter and see how one of the most fascinating tools has shaped the world around us. 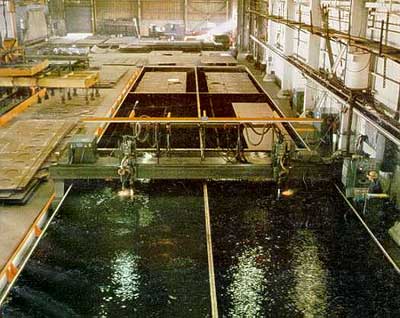 This is what plasma cutting looked like in 1980.
Photo courtesy Torchmate CNC Cutting Systems

In World War II, U.S. factories were cranking out armor, ordnance, and aircraft almost five times faster than the Axis powers. This was largely thanks to private industry's tremendous innovations in the field of mass production.

One area of innovation rose out of the need to cut and join aircraft parts more efficiently. Many factories working on military aircraft adopted a new method of welding that involved the use of an inert gas fed through an electric arc. The breakthrough discovery was that charging the gas with an electric current formed a barrier around the weld, which protected it from oxidation. This new method made for much cleaner lines at the joints and much sturdier construction.

In the early 1960s, engineers made a new discovery. They figured out that they could boost temperatures by speeding up the flow of gas and shrinking the release hole. The new system could reach higher temperatures than any other commercial welder. In fact, at these high temperatures, the tool no longer acted as a welder. Instead, it worked like a saw, cutting through tough metals like a hot knife through butter.

This introduction of the plasma arc revolutionized the speed, accuracy and types of cuts manufacturers could make in all types of metals. In the next section, we'll examine the science behind this system.

A plasma cutter can pass through metals with little or no resistance thanks to the unique properties of plasma. So what is plasma?

There are four states of matter in the world. Most things we deal with in our daily lives are in the form of solids, liquids, or gases. These states are divided based on the way that molecules behave within each one. Take water as an example:

Click on Cold, Warm and Hot to watch the H2O in this glass of water

move through three states of matter.

So what happens if you were to heat gas even more? This brings us to the fourth state: plasma.

When the fast-moving electrons collide with other electrons and ions, they release vast amounts of energy. This energy is what gives plasma its unique status and unbelievable cutting power.

Almost 99 percent of all matter in the universe is plasma. It's not common on Earth because of its extremely high temperatures; but somewhere like the sun, it's the norm. On Earth, you find it in lightning, among other places.

Plasma cutters are not the only devices to harness the power of plasma. Neon signs, fluorescent lighting and plasma displays, just to name a few, all rely on it to get the job done. These devices use "cool" plasma. Though cool plasma cannot be used to cut metals, it has tons of other useful applications. Check out How Fluorescent Lamps Work to learn more.

Inside a Plasma Cutter 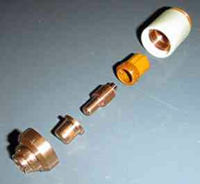 Inside a plasma cutter: The electrode is at the center, and the nozzle is just below it. The orange piece is the swirl ring, which causes the plasma to turn rapidly as it passes.
Photo courtesy Torchmate CNC Cutting Systems

Plasma cutters come in all shapes and sizes. There are monstrous plasma cutters that use robotic arms to make precise incisions. There are also compact, handheld units that you might find in a handyman's shop. Regardless of size, all plasma cutters function on the same principle and are constructed around roughly the same design.

Plasma cutters work by sending a pressurized gas, such as nitrogen, argon, or oxygen, through a small channel. In the center of this channel, you'll find a negatively charged electrode. When you apply power to the negative electrode, and you touch the tip of the nozzle to the metal, the connection creates a circuit. A powerful spark is generated between the electrode and the metal. As the inert gas passes through the channel, the spark heats the gas until it reaches the fourth state of matter. This reaction creates a stream of directed plasma, approximately 30,000 F (16,649 C) and moving at 20,000 feet per second (6,096 m/sec), that reduces metal to molten slag.

The plasma itself conducts electrical current. The cycle of creating the arc is continuous as long as power is supplied to the electrode and the plasma stays in contact with the metal that is being cut. In order to ensure this contact, protect the cut from oxidation and regulate the unpredictable nature of plasma, the cutter nozzle has a second set of channels. These channels release a constant flow of shielding gas around the cutting area. The pressure of this gas flow effectively controls the radius of the plasma beam.

Click the On/Off switch to watch a plasma cutter in action.

Plasma on the Job 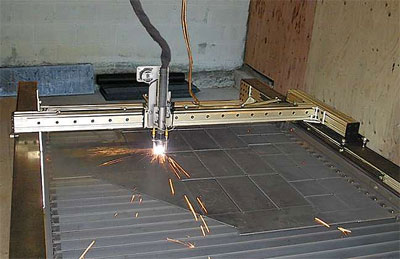 In CNC (computer numerically controlled) cutting, you arrange your shapes on the computer screen and cut them automatically, without having to touch the material.
Photo courtesy Torchmate CNC Cutting Systems

Plasma cutters are now a staple of industry. They are used largely in custom auto shops as well as by car manufacturers to customize and create chassis and frames. Construction companies use plasma cutters in large-scale projects to cut and fabricate huge beams or metal-sheet goods. Locksmiths use plasma cutters to bore into safes and vaults when customers have been locked out. 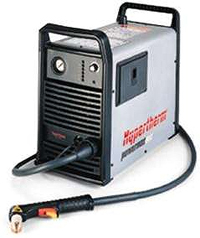 In the past, plasma cutters were prohibitively expensive and were used primarily for huge metal-cutting jobs. In recent years, the cost and size of plasma cutters have dropped considerably, making them available for more personal projects. Artists and metal workers use handheld cutters to create unique works of art that would never be possible with conventional metal-working tools. This single tool gives artists the ability to bevel cuts, bore precise holes and cut in just about any way they can conceive.

The plasma cutter is one of the most interesting and powerful tools developed in the 20th century. Using basic principles of physics to harness the fourth state of matter, the plasma cutter performs with nearly magical results. One can only imagine, as our understanding of plasma grows, how many more tools and applications will utilize this fascinating force of nature.

For more information on plasma and plasma cutters, as well as related topics, check out the links on the next page.