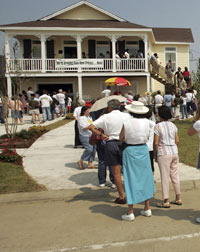 People line up to tour a modular home in New Orleans in 2006.
Mario Tama/Getty Images

Prefabricated houses have a long history in the United States. An early version of a prefab home was sent from England in the 1600s, but real prefabrication did not take off until the arrival of "house kits." House kits contained all of the house's parts, so the owners built the homes themselves or hired people to construct them. The Aladdin Company started selling the earliest house kits from its catalog in 1906. One of the best-known early kit-home sellers was Sears, Roebuck and Co., which sold more than 100,000 homes from 1908 to 1940 [source: Sears archive].

A number of factors contributed to the popularity of the kit homes. Companies like Aladdin, based in Michigan, benefited from the automotive, iron, steel and coal industries that were booming in their areas. People with money wanted to build houses for their families away from the city, and an improving road system allowed them to build in the country. Additionally, just as in the automotive industry, manufactured houses benefited from assembly-line production. Housing parts, instead of being constructed on site by carpenters, could be mass-produced on conveyor belts and shipped to the site for much lower costs. Skilled technicians wouldn't have to make plaster walls if drywall could be mass-produced in a factory. Plumbing and electrical wiring, which could also be installed much more cheaply at a factory instead of on site by an assortment of skilled laborers.

Lower costs meant that more middle-class Americans could build homes. For less than $2,500, the home buyer received a kit containing about 30,000 pieces -- including everything from lumber to nails and hardware to paint and shingles -- plus a book on how to construct the home.

The kit homes were not just for those looking to build their first homes; they were popular for the more upwardly mobile who wanted a vacation home or beach bungalow. For those interested in taking their vacation homes with them, "trailer coaches" were invented in the 1920s. But after the stock-market crash of 1929, not nearly as many people had the money for their own homes, and kit-home sales declined.

Mobile homes were the first type of prefab home sales to rebound after World War II. Returning veterans needed housing, and many were taking to the new highway systems with their families. Mobile homes were also cheap, so eventually, many people stopped moving theirs from town to town and settled down, using their mobile homes as their permanent residences.

By the 1970s, the federal government decided to regulate these manufactured homes for safety reasons, and in 1976 the government adopted the U.S. Department of Housing and Urban Development building code -- more commonly known as the HUD Code. The code set standards for heating, plumbing and electrical systems, as well as structural design, construction, fire safety and energy efficiency. (In 1994, the government updated the HUD Code to include even higher standards for prefabricated housing.)

After that, manufactured homes became a source for low-cost housing. However, in the past few decades -- and especially since the current housing slump -- innovations have allowed manufactured homes to cater to a more upscale market and to those looking to go "green." And people in more crowded countries looking to build affordable, durable housing have also turned to prefab.