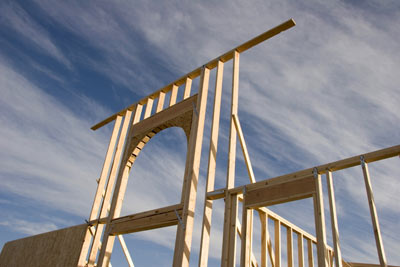 Buyers can expect to pay 10 to 25 percent less for a prefab house than for a "stick-built" one.
© Photographer: Mbogacz | Agency: Dreamstime

Buyers can typically expect to pay less for a prefab home than they would for stick-built construction. Modular homes do offer pricey customization, but the material costs still decrease with assembly-line construction.

Because prefab home parts like windows and walls are made uniformly, there is no need for skilled workers to manufacture parts individually, which drives down costs. Also, factories, unlike most individual tradesmen, can buy the supplies in bulk. Prefabricated houses are constructed indoors and away from the weather, which also reduces delays and subsequent costs. Prefabricated houses, like stick-built homes, do not have fixed prices, so buyers can negotiate. In general, they can expect to pay 10 to 25 percent less for prefabricated houses over stick-built construction.

Typically, land is the biggest cash outlay for a prefabricated house. And, depending on your skill level, construction could be the other big expense.

People who ordered Sears, Roebuck and Co. homes in the 1900s usually possessed carpentry skills, but most modern homeowners wouldn't feel comfortable laying their own foundation. There are other regulations for building, including zoning restrictions, survey requirements and electrical and water hookups. Some companies offer their own services -- for an extra fee, of course.

Once buyers have the land and the house they want, financing can be a hurdle. Manufactured homes aren't considered real estate until they are permanently installed, so it can be more difficult to get financing for them. Even then, manufactured homes can depreciate in value, so lenders are less likely to give out loans.

Modular homes, however, do not suffer as much from this lower-quality stigma, so financing for them is more similar to that for stick-built houses.

Can I Build My Own Prefab House?

The short answer: probably not. Unless you have a background in construction and own an 80-foot crane, you probably won’t be able to put together a house on your own. And even if you did, you’d also have to deal with inspections and building codes. You’d need permits for a driveway, well drilling and septic systems and, once the house arrives, you would have to inspect it to ensure there was no damage in transit. There are contractors who specialize in manufactured homes, and many prefab manufacturers can offer recommendations for your particular area.