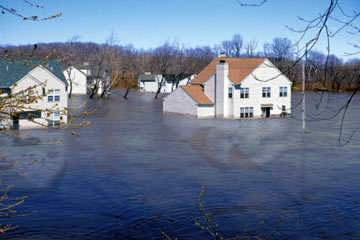 Most insurance companies don't provide flood insurance because the risks are too great. So to be insured against flood, homeowners must purchase insurance from the National Flood Insurance Program.
Comstock/Thinkstock

The town of Wilmington is the quintessential Vermont burg. Located in the southern part of the state near Mount Snow, Wilmington bustles during the winter, summer and fall. Each morning, diners, both local and otherwise, savor the inch-thick blueberry pancakes dripping with local maple syrup at Dot's Diner. Down the road at Al Wurzberger's 1836 Country Store, tourists fill shopping bags with tasty cheddar, mouth-watering fudge and even cuckoo clocks. Each summer, gardeners line Main Street with hanging baskets of flowers.

It's a wonderful place to spend an afternoon, a summer, a lifetime. That is until the flood of 2011 washed almost everything away. In August, hurricane-turned-tropical-storm Irene pounded Wilmington with heavy rain. The Deerfield River, as tame as a river can be, overflowed its bucolic tree-lined banks, sending a torrent of water racing downstream. At Dot's, located steps away from the Deerfield, water reached up to the building's second floor, not an easy feat. Stores and restaurants became muddied and waterlogged.

Wilmington wasn't alone. All across Vermont, flash floods tossed houses around like cord wood. Covered bridges, which stood for hundreds of years, became floating debris. When the water receded and the clean up began, many Vermonters found their homeowners insurance would not pay for the damage. Instead, they needed special flood protection provided by the National Flood Insurance Program (NFIP). Only 3,673 homeowners in the entire state had flood insurance [source: Jewell].

Run by the Federal Emergency Management Agency (FEMA), NFIP helps homeowners and renters rebuild after a flood occurs. Most insurance companies do not provide flood insurance on their own. The risks are too great. As a result, the government subsidizes the program and homeowners buy flood insurance through a private company. Go to the next page to find out how it works.

What is flood insurance?

Take a deep breath. Smell that? Ah, spring. As surely as the crocuses bloom and people start sneezing, the rains will come. And with the rains, come the floods. Runoff, winter melt, overflowing streams and ice-clogged rivers. Whether you live in Missouri, upstate New York, Connecticut or Iowa, when it rains, it pours, and when it pours, it can be devastating.

Floods are one of the most common hazards in the United States, resulting in billions of dollars in damage each year. Some are slow to form. Others happen in a flash. Are you ready? Probably not. The Insurance Information Institute found that in 2011, only 14 percent of U.S. homeowners had flood insurance. That number was four percent higher than the year before. Most of those who bought flood protection -- 19 percent -- live in the South, while 13 percent live in the Midwest [source: Bradenton Herald].

Flood insurance is available to those in flood-prone areas. Most standard insurance policies cover water damage from bursting pipes and broken faucets. However, the policies don't protect a homeowner when a river overflows its banks or surface water of any sort runs into the house. That's why in 1968 congress created NFIP to help property owners rebuild and replace their belongings after a flood.

The standard flood insurance policy pays for "direct physical damage" to a home or building. Property owners must buy a separate policy to protect what's inside the buildings. Homeowners can purchase up to $250,000 in coverage for their house and up to $100,000 for their possessions. Renters can buy flood insurance, too [source: FloodSmart.gov].

FEMA doesn't sell flood insurance directly. The agency works with private insurance companies, who then sell coverage to their customers. The government sets the rates, which do not change from company to company or agent to agent. The cost, of course, depends on a variety of things such as how much insurance a homeowner wants, and how flood-prone the neighborhood is [source: FloodSmart.gov]. The average yearly premium is $520 for $100,000 worth of coverage for a home without a basement, and $615 a year for a home with a basement [source: Powell].

Filing a flood-insurance claim is like filing a regular claim on your homeowners insurance. Once you file a claim, an adjustor will survey the damage. You will then have to provide a "proof of loss" form, which must be submitted to the insurance company within 60 days [source: FloodSmart.gov].

Do you need flood insurance? 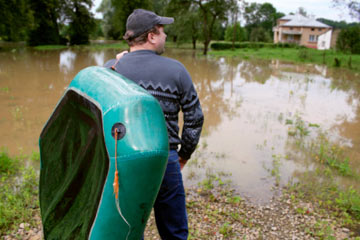 To be eligible for the National Flood Insurance Program, your community must adopt and enforce floodplain ordinances to mitigate flood damage.
iStockphoto/Thinkstock

His name is Bill, and every once and a while, I'll see him at the end of the bar sipping whatever he sips. Bill lives down by the river, not too far from my fishing hole. When the harsh winter of 2010 to 2011 finally melted away, Bill was in a peck of trouble. The snow melt coupled with heavy rains flooded the river and his house. Luckily, Bill had flood insurance, which helped him rebuild.

Most of the repair work to Bill's house was completed by the end of October 2011. Then Irene, the same storm that drowned Vermont, blew through. Poor Bill. Flooded again. Now I know why he sips whatever he sips. Luckily, flood insurance covered most repairs -- again. Bill is now looking to sell his house. I don't blame him.

To find out what a community's flood risk is -- as though poor Bill didn't already know -- FEMA has nearly 100,000 maps. The maps outline where the high-risk and moderate-to-low risk zones are located. If you live in a high-risk zone, and have a federally-backed mortgage, the law requires that you have flood insurance. There's a good reason why. Buildings located in high-risk flood areas have a 26 percent chance of being damaged by a flood during the 30-years it would take to pay back a conventional mortgage [source: FloodSmart.gov].

Let's review the safety tip of the day: Just because you've never been flooded before, doesn't mean it'll never happen. Many conditions can result in a flood, including hurricanes, damaged levees, antiquated or clogged drainage systems, and rapid rainfall. All of these disasters are covered by flood insurance.

Just ask Bill and the people of Vermont.

I don't have flood insurance. The river is a mile down the road and I live on a hill. What I need is tree insurance. Trees tend to fall on my property like discarded matchsticks. Just the other week, I had a contractor clear a good deal of my property. Oh yeah, it wasn't cheap.