Can my insurance company cancel my policy if I submit too many claims?

The Insurance Companies are Watching

About 10 years ago, the Independent Insurance Agents & Brokers of America (IIABA) conducted the first-ever survey seeking information on homeowners insurance non-renewals and premium increases. What the group found was eye-popping. Over a two-year period, 2.5 million households lost their homeowners coverage and 51 million households saw their rates increase. Nearly 57 percent of households saw their rates jump up to 10 percent, while 23.2 percent saw premiums skyrocket between 11 and 25 percent [source: Independent Insurance Agents & Brokers of America].

Why were there so many non-renewals? Because homeowners insurance isn't a big money maker for insurance companies. Over the past few decades, insurers paid out more money in claims than they took in as premiums. Many of those claims came from a series of natural disasters that caused billions in damage [source: Christie].

In 2005, property damage from Hurricane Katrina alone cost insurance companies $123 billion, the all time record. And the trend continues. In 2011, the insurance industry had another bad year. A series of catastrophes, including earthquakes, floods and tornados generated $116 billion in claims [source: Neligan].

Another reason that insurance companies cancel so many people is because the firms are looking over your shoulder. Insurance companies keep better track of the individual claims by using databases such as CLUE, the Comprehensive Loss Underwriting Exchange.

Back in the good old days, insurance companies would have to search public records and rely on homeowners to decide whether to sell someone a policy. These days, all the companies have to do is log on to CLUE. The database contains up to seven years of personal property claims history [source: Wisconsin Office of the Commissioner of Insurance].

Can everyone get homeowners insurance?

Can you reduce the cost of your homeowners insurance? 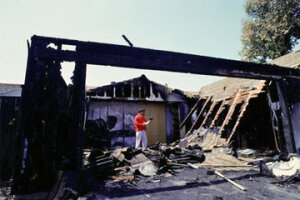 How to Submit an Insurance Claim