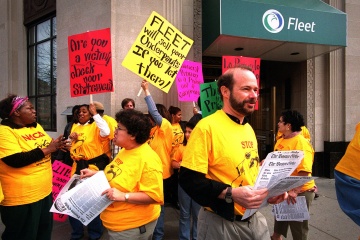 NACA's roots are in advocacy. In 1988, Bruce Marks, concerned that hotel workers didn't have the means to live in the city in which they worked because housing was too expensive, became involved with a hotel workers union in Boston. His mission? He pushed the union to include a housing benefit, a battle that involved changing federal law. From this successful fight, NACA, originally called the Union Neighborhood Assistance Corporation of America, was born.

These days, the nonprofit fights for affordable housing by battling big-name banks with predatory lending practices — lenders who exploit borrowers who can't really afford their loans. Both Marks and his organization have been willing to do whatever is needed to create change, which has included picketing the homes of bankers and the schools of their children, interrupting stockholder meetings and circulating details about a financial executive's (alleged) affair [source: Swidey].NACA's reasoning? That foreclosure brought on by predatory lending is painful and embarrassing for all the members of affected families, and CEOs should understand what that feels like. Because he targets lenders he's identified as greedy loan sharks, Marks is known as a "bank terrorist," and NACA prides itself on being these institutions' worst nightmare.

For example, NACA battled Fleet Bank and its subsidiary, Fleet Finance, for more than four years regarding its ties to predatory lenders. The agency staged demonstrations to turn the national media spotlight on Fleet, and when Marks testified before the U.S. House and Senate Banking Committees in 1993, he brought along more than 400 people who had lost their homes because of Fleet's practices. When the Federal Reserve refused to meet with members of NACA or hold hearings on predatory lending practices, NACA orchestrated stunts such as publicizing then-chairman Alan Greenspan's direct phone number.

In the end, NACA met with victory: Fleet agreed to invest $8.5 million in affordable lending to low- and moderate-income borrowers, to commit $140 million toward NACA's affordable home-ownership program, and to provide appropriate restitution to the borrowers and communities affected. Fleet's lending subsidiary, Fleet Finance, was shuttered [source: NACA].

Another high-profile public battle resulted in the overturning of a class-action settlement involving The Associates, which was, in the late '90s, the largest finance company in the United States. The lawsuit would have provided The Associates with immunity while providing as little as $50 to borrowers who had lost homes. Additionally, after a multi-year campaign — and a 14-hour meeting — The Associates eventually invested $100 million into NACA's mortgage program [source: NACA].

The advocacy agency also once targeted First Union CEO Edward Crutchfield in an effort to get the bank to work with NACA. In the end, First Union settled with NACA, committing $150 million to its loan program, but not before NACA organized a postcard protest: Members sent fliers and reports to Crutchfield's neighbors detailing his bank's unsavory practices [source: NACA].

NACA has also turned its energies to combatting subprime lending. The organization has partnered with big-name banks to support its affordable mortgages and to restructure loans for people at risk of losing their home because of a bad deal. In 2003, Citigroup committed $3 billion to the NACA mission, making NACA the first nonprofit mortgage broker — the middleman between the borrower and the lender [source: NACA]. And in 2014, NACA received $10 billion in funding from Bank of America, enabling the agency to lend under its own terms to about 50,000 homeowners through 2024 [source: Appelbaum]. NACA sees a future in which the agency also brokers other types of lending and financial products, such as car and student loans.

Bankers have come to fear Marks and his horde of NACA protestors, outfitted in yellow shirts, who could wreak havoc on everything from an awards ceremony to a quiet night at home. Critics have accused Marks of targeting banks just to get money for NACA, in addition to tying up the lending process with paperwork.

In the end, whatever you think of NACA's tactics, the organization does garner the funds that provide affordable mortgages for people who wouldn't otherwise be able to buy (or save) their home.

Whether you think the organization is an expert in smart savings or in extortion, you can't argue its popularity. Back in 2011, NACA counseled about 44,000 homeowners, and more than 22,000 mortgages were restructured in those nine months -- and it all was in accordance with HUD requirements.