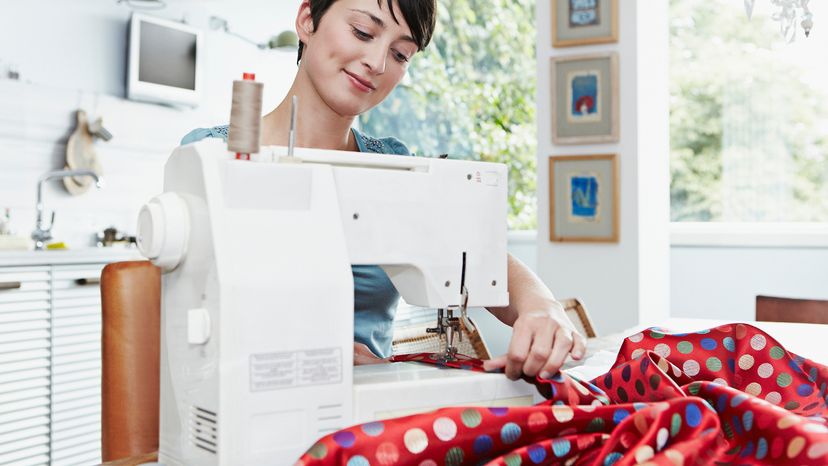 ­Without the sewing machine, the world would be a very different place. Like the automobile, the cotton gin and countless other innovations from the past 300 years, the sewing machine takes something time-consuming and laborious and makes it fast and easy. With the invention of the mechanized sewing machine, manufacturers could suddenly produce piles of high-quality clothing at minimal expense. Because of this technology, the vast majority of people in the world can now afford the sort of sturdy, finely-stitched clothes that were a luxury only 200 years ago.

In this article, we'll take look at the remarkable machine that makes all of this possible. As it turns out, the automated stitching mechanism at the heart of a sewing machine is incredibly simple, though the machinery that drives it is fairly elaborate, relying on an assembly of gears, pulleys and motors to function properly. When you get down to it, the sewing machine is among the most elegant and ingenious tools ever created.

Sewing machines are something like cars: There are hundreds of models on the market, and they vary considerably in price and performance. At the low-end of the scale, there are conventional no-frills electric designs, ideal for occasional home use; at the high-end, there are sophisticated electronic machines that hook up to a computer. Textile companies have many machines to choose from, including streamlined models specifically designed to sew one particular product.

The loop stitch approach is very different from ordinary hand-sewing. In the simplest hand stitch, a length of thread is tied to a small eye at the end of a needle. The sewer passes the needle and the attached thread all the way through two pieces of fabric, from one side to the other and back again. In this way, the needle runs the thread in and out of the fabric pieces, binding them together.

While this is easy enough to do by hand, it is extremely difficult to pull off with a machine. The machine would have to release the needle on one side of the fabric just as it grabbed it again on the other side. Then it would have to pull the entire length of loose thread through the fabric, turn the needle around and do the whole thing in reverse. This process is way too complicated and unwieldy for a simple machine, and even by hand it only works well with short lengths of thread.

Instead, sewing machines pass the needle only part-way through the fabric. On a machine needle, the eye is right behind the sharp point, rather than at the end.

The needle is fastened to the needle bar, which is driven up and down by the motor via a series of gears and cams (more on this later).

There are actually several different types of loop stitches, and they all work a little differently.

Chain Stitch The simplest loop stitch is the chain stitch. To sew a chain stitch, the sewing machine loops a single length of thread back on itself.

When the needle pushes through the fabric again, the new loop of thread passes directly through the middle of the earlier loop. The looper grabs the thread again and loops it around the next thread loop. In this way, every loop of thread holds the next loop in place.

The main advantage of the chain stitch is that it can be sewn very quickly. It is not especially sturdy, however, since the entire seam can come undone if one end of the thread is loosened. Most sewing machines use a sturdier stitch known as the lock stitch.

The most important element of a lock-stitch mechanism is the shuttle hook and bobbin assembly. The bobbin is just a spool of thread positioned underneath the fabric. It sits in the middle of a shuttle, which is rotated by the machine's motor in synch with the motion of the needle.

Just as in a chain-stitch machine, the needle pulls a loop of thread through the fabric, rises again as the feed dogs move the fabric along, and then pushes another loop in. But instead of joining the different loops together, the stitching mechanism joins them to another length of thread that unspools from the bobbin.

When the needle pushes a loop through the thread, the rotary shuttle grips the loop with a hook. As the shuttle rotates, it pulls the loop around the thread coming from the bobbin. This makes for a very sturdy stitch.

In the next section, we'll see how the sewing machine moves all of these components in synch.

The conventional electric sewing machine is a fascinating piece of engineering. If you were to take the outer casing off, you would see a mass of gears, cams, cranks and belts, all driven by a single electric motor. The exact configuration of these elements varies a good deal from machine to machine, but they all work on a similar idea.

The electric motor is connected to a drive wheel by way of a drive belt. The drive wheel rotates the long upper drive shaft, which is connected to several different mechanical elements. The end of the shaft turns a crank, which pulls the needle bar up and down. The crank also moves the thread-tightening arm. Moving in sync with the needle bar, the tightening arm lowers to create enough slack for a loop to form underneath the fabric, then pulls up to tighten the loop after it is released from the shuttle hook.

The motor is controlled by a foot pedal, which lets the sewer vary the speed easily. The cool thing about this design is that everything is linked together, so when you press on the pedal, the motor speeds all of the processes up at the same rate. The process is always perfectly synchronized, no matter how fast the motor is turning.

The sewing machine shown in the diagram can only produce a straight stitch -- a simple stitch that binds fabric with a straight seam. Most modern machines are a lot more flexible; they can produce a variety of stitches and, in some cases, can make complex designs. In the next section, we'll see how modern machines pull this off.

This zig-zag stitch is fairly simple to achieve. All you have to do is move the needle assembly from side to side at the same time that it is moving up and down. In a conventional electric machine, the needle bar is attached to an additional linkage, which is moved by a cam on the main drive shaft. When the linkage is engaged, the rotating cam shifts the linkage from side to side. The linkage tilts the needle bar back and forth horizontally in synch with the up and down motion.

Things work a little differently in the modern machine. Today's high-end home sewing machines have built-in computers, as well as small monitor displays for easier operation. In these models, the computer directly controls several different motors, which precisely move the needle bar, the tensioning discs, the feed dog and other elements in the machine. With this fine control, it is possible to produce hundreds of different stitches. The computer drives the motors at just the right speed to move the needle bar up and down and from side to side in a particular stitch pattern. Typically, the computer programs for different stitches are stored in removable memory disks or cartridges. The sewing-machine computer may also hook up to a PC in order to download patterns directly from the Internet.

Some electronic sewing machines also have the ability to create complex embroidery patterns. These machines have a motorized work area that holds the fabric in place underneath the needle assembly. They also have a series of sensors that tell the computer how all of the machine components are positioned. By precisely moving the work area forward, backward and side to side while adjusting the needle assembly to vary the stitching style, the computer can produce an infinite number of elaborate shapes and lines. The sewer simply loads a pattern from memory or creates an original one, and the computer does almost everything else. The computer prompts the sewer to replace the thread or make any other adjustments when necessary.

Obviously, this sort of high-tech sewing machine is a lot more complex than the fully manual sewing machines of 200 years ago, but they are both built around the same simple stitching system: A needle passes a loop of thread through a piece of fabric, where it is wound around another length of thread. This ingenious method was one of those rare, inspired ideas that changed the world forever.

To learn more about sewing machines, including details of their history, check out the links on the next page.