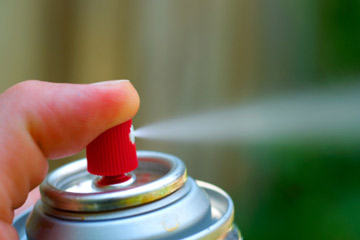 You're looking for a way to breathe new life into your aging patio furniture. Your wife has changed her mind (again) about what color she likes for the shutters. The kid who lives next door needs to make a sign for a lemonade stand. Fortunately, there's a simple solution to all of these problems, and it comes in a can of spray paint.

Spray paint, also known as aerosol paint, is paint that's stored in a pressurized container and dispensed using a valve to release a mixture of paint and a propellant, usually pressurized gas or compressed air. The result is a fine, even mist that is easily applied to a variety of surfaces. Spray painting is one of three primary methods for paint application besides using a paintbrush or a roller, and is generally quicker, cleaner, and easier to achieve a uniform coat.

Spray paint started becoming a steadfast friend to do-it-yourselfers when American artist Francis Davis Millet developed an oil and lead mixture that could be sprayed to speed up preparations for the Chicago World's Fair. But it was Edward Seymour who thought to use an aerosol spray to dispense paint. In 1949, he demonstrated a new aluminum paint designed for finishing radiators on a large scale quickly. Aerosol spray cans had been around since Norwegian engineer Eric Rotheim invented the first one in 1931, and Seymour was simply piggybacking on this innovation as a way to showcase his own product [source: Harris]. But he was so intrigued by this new method of paint delivery that he directed his company, Seymour of Sycamore, to dedicate considerable resources to exploring its potential [source: Seymour of Sycamore].

Around the same time Seymour was working on his contributions to spray paint, Krylon and Crown Holdings Inc. were each developing new can designs that eventually gave rise to the metal cylinders we use today [source: Sattler]. They were smaller, lighter, cleaner and applied an even coat faster than a brush or roller could, making those small paint projects around the house a lot more manageable. And once the manufacturing industry discovered its benefits, spray paint went from a resourceful and useful invention to a full-blown industrial boon.

Today, spray paint comes in enamels, stains, flats and glossies, and there are varieties designed for virtually any surface, including wood, metal, glass, plastic and masonry. In other words, if it can be painted, there's probably a spray paint that can do the job.

In this article, we'll take a closer look at spray paint and see what makes it tick -- or rather, what that racket is when you shake it.

The Science of Spray Paint

Those ubiquitous, cylindrical cans you have sitting around the garage represent a pretty simple design. They're usually constructed from light gauge steel or aluminum and include a valve, a dip tube and a pea, each of which we'll discuss later in this section.

Spray paint works the way it does because it's actually a combination of paint and a gas propellant. During the manufacturing process, the cans are first filled with paint and then injected with the gas propellant. The valve is then crimped, trapping the highly compressed compound within the confines of the can. And this is the genius behind spray paint's efficiency. Chlorofluorocarbons were the propellant of choice for most aerosol-delivered products, including spray paint, until 1978, when it was banned after it was discovered that it contributed to the depletion of the ozone layer [source: Martineau]. So the industry turned to hydrocarbons – organic compounds made up of hydrogen and carbon – as an alternative until the 1980s when it was determined they may cause smog (butane, propane and methane are a few common examples of hydrocarbons) [source: Practice Greenhealth]. Today, most aerosols use hydrofluorocarbons ,which consist of hydrogen, fluorine and carbon, and present a much smaller risk to the environment because they do not contain potentially harmful elements like chlorine.

So, how does all of this work together?

When the nozzle is pressed, the paint-propellant mixture rushes up the dip tube in response to the sudden, dramatic change in pressure that causes the propellant in the can to expand, forcing the paint through the tube and out through the nozzle. The dip tube acts like a straw, with one end attached to the valve and the other end near the bottom of the can. Once through the dip tube, the nozzle and free of the pressurized can, the propellant expands and the paint atomizes into a fine, even mist. These tiny paint particles (not actually atoms) are evenly distributed because they are positively charged, repelling each other as they leave the can. And because the object being painted is oppositely charged, spray paint adheres to the surface and can be applied in even, smooth layers with almost zero waste.

The pea, a small metal ball bearing, maintains the propellant-paint mixture inside the can. By shaking the can, the pea agitates the mixture so you can be sure the two components are combined properly. This is where spray paint gets its signature rattle. If the paint and propellant are allowed to settle, they will come out in uneven proportions, causing the paint to clump.

This combination of mechanics, chemistry and physics has turned spray paint into one of the most useful tools for home improvement. But the benefits are not limited to household use, so keep reading and discover some heavy-duty applications of spray paint.

Spray Paint as a Narcotic?

The reason paint is viscous is because it contains a solvent, usually the hydrocarbon toluene, that evaporates quickly at room temperature. Two things happen as the solvent evaporates: The paint dries, and chemical vapors are released. These vapors, if inhaled, can have intoxicating and even hallucinatory effects. In addition to solvents, spray paints contain aerosols, which also release harmful chemicals. This double-whammy, coupled with relatively easy access (most retailers will not sell to minors) makes spray paint the product of choice for those looking to get high. 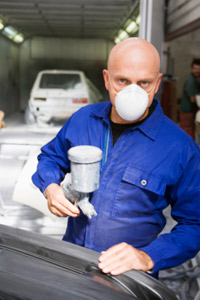 The benefits spray paint offers weekend warriors -- fast application, even coating, little waste -- are magnified in a large-scale setting, and it wasn't long after Seymour launched his idea to the masses that factories and manufacturing plants started to take notice.

Powder coating, sometimes referred to as electrostatic spray painting, is a method for applying dry paint to a surface. Like the paint-propellant mixture inside a spray can, compressed air is used to drive atomized particles of paint through a spray gun onto the target. These particles are very fine and resemble dust, or a powder. And just as with the aerosol can, the particles acquire an electrical charge from the friction created as they pass through the spray nozzle. Because positively charged particles repel each other, they distribute themselves evenly before they make contact with the object being painted. Since the object is always oppositely charged, usually by being grounded using a cable attached to any metal part of the assembly, the paint adheres to the surface.

Companies turn to vacuum coating to apply water-based paint to objects (usually pieces manufactured in sheets such as wood, glass or plastics) that require extremely thin coats. In this method, the object being painted is placed into a chamber, or paint reservoir, where its entire surface area is either submerged into a paint solution or sprayed with a nozzle. The paint is applied in the same volume uniformly around the object, so the entire piece is covered. Finally, the object is removed from the chamber and exposed to extremely high levels of UV light. This photochemical process, called UV curing, uses light rather than heat and is capable of drying objects in seconds.

Finally, flatline spraying is among the most popular methods for painting material that's manufactured in large quantities. Objects, usually small items less than 4 inches (about 10 centimeters) thick, on an assembly line are fed into a machine designed specifically for that part. The paint is applied by spray guns programmed to complete a series of movements to ensure the entire piece is covered.

But spray paint isn't all home improvement and manufacturing. Keep reading to find out how spray paint is making women and decaying buildings more attractive. 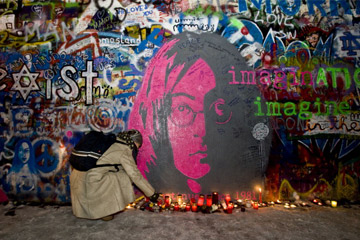 10 Multifunction Tools on the Market
What's the best type of torque wrench to use for headlights?
What are some repairs that require vise-grip pliers?