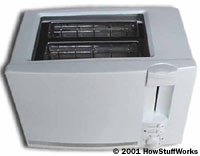 You can purchase a toaster at any discount store for less than $20 (U.S.). The particular model shown on the right allows you to set the darkness of the toast it produces and also has a defrost mode.

The most common way for a toaster to create the infrared radiation is to use nichrome wire wrapped back and forth across a mica sheet, like this:

Nichrome wire is an alloy of nickel and chromium. It has two features that make it a good producer of heat:

The very simplest toaster would have two mica sheets wrapped in nichrome wire, and they would be spaced to form a slot about an inch (2.5 cm) wide. The nichrome wires would connect directly to a plug. To make toast:

Most people don't have this sort of patience, nor do they like crumbs all over the counter. So a toaster normally has two other features: