by Sara Elliott
Prev NEXT
1 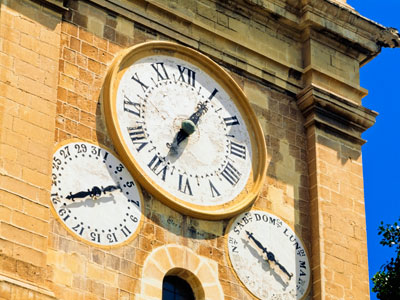 Whether you prefer digital or analog, there's a good chance that a wall of your classroom, the desk in your office or a bank you passed on your ride to work or school sported a clock. If that isn't enough, there's the clock in the family car, and all of the ones on the DVD players, VHS players, cable or satellite boxes, televisions, microwaves, coffee makers and ovens. The time seems to be everywhere, but that wasn't always the case.

The first clock was most likely a stick partly buried in the ground. As the sun made its circuit across the sky, the shadow cast by the stick moved in measurable increments. This was a rudimentary sundial; a smart, if limited, way to tell the time. Accuracy was the real problem when it came to early man's attempt to lock down short-time measurement. The sun was a great indicator, but the system didn't work at night or when it was cloudy outside. Another problem was that the length of the day changed throughout the year, changing whatever incremental measurement was set to mark the time.

In the second century, the astronomer Ptolemy deduced that placing a slanted object parallel to the Earth's axis would provide a consistent incremental measurement regardless of the season [source: Behar]. This led to standardized time measurement, solving one problem. The second problem, telling time when the sun wasn't shining, inspired a number of ingenious solutions. Water clocks used dripping water, leaving a small opening in a container to mark the passage of time. Candles were also widely used because they burned at a consistent rate when there was no breeze. Romantic methods like hourglasses were also widely employed, but it wasn't until around the beginning of the 14th century that a new, reliable method came on the scene: the mechanical clock.

­No one knows who invented it, but this remarkable device used an oscillating escapement to control the movement of the clock mechanism [source: Eveything2.org]. This was a pretty stable method of short-time measurement, and it revolutionized the way man related to the passage of time. Now, people could begin setting appointments and reliably keeping them. Precise planning, like that of many religious observances, could be closely scheduled. The world was beginning to change. A faster pace was possible because it was easier to organize activities. Man was on the road to three-minute eggs, stopwatches and power lunches.

Now that we can synchronize our watches, let's proceed to the next section where we'll explore the wonders of the toilet.

The Birth of the Alarm Clock

Ever wondered who’s to blame for that alarm clock blaring in your ear every morning? Well, you can thank the Greeks. Around 250 B.C., a modified water clock whistled when the clock’s water rose to a certain level [source: Bellis].