by Sara Elliott
Prev NEXT
7 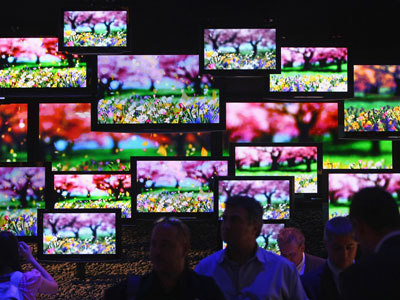 TVs just may be the most popular appliance in the world.
Sean Gallup/Getty Images

From the principle of photoconductivity and the phenomenon of visual persistence, the idea of television was born in the late 19th century. It took only 90 years to go from that modest beginning to the televised broadcast of the first moon walk in 1969.

­Before television, people huddled around the radio to listen to news and entertainment programming. Before that, they relied on their newspapers and the entertainment value of their friends and neighbors. With the advent of the box with moving pictures and sound, the world was available at a flip of the dial. Although television didn't play a part in World War II, the end of the war brought an interesting and important development to television. The surrender of the Japanese in 1945 was broadcast over the fledgling television medium, bringing the drama and immediacy of current events to the minds and hearts of the public [source: Castleden] The NBC network, which began in 1939, started to grow, and television, an oddity that graced a few public bars and hotels, became a part of our collective consciousness.

There are more than 1.5 billion television sets in the world today, and that number is growing [source: Woodford]. New television technologies are vying with one another for supremacy, and the potential for the viewer to access and control the viewing experience is almost unlimited. Companion technologies, like the digital video recorder (DVR, TiVo), which allows viewers to schedule, automatically record and play back television programming, are gaining in popularity, and the future for the medium of television is bigger, brighter and sharper, and it couldn't be better.

Next, we'll see how America got cool and explore the next appliance we can't live without, the air conditioner.