How does design affect a washer's energy efficiency? 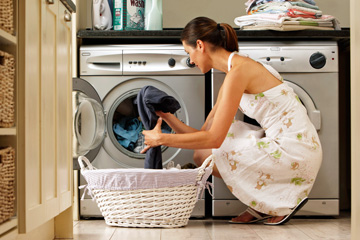 Front-load washers like the one shown above are becoming increasingly popular.
Andrew Olney/Photodisc/Getty Images

There's been a revolution in washer design in recent years, driven in part by a governmental push to make residential appliances more energy efficient and environmentally friendly. Washers that bear the U.S. Environmental Protection Agency's (EPA) Energy Star logo use around 30 percent less energy and a whopping 50 percent less water than washers produced even a decade ago. How are washing machine manufacturers making washer design and energy efficiency work together to clean clothes? After all, clothes washers just move water and textiles in a big tub. How do you change a process that's been pretty much a standard way to get dirt off of fabric for hundreds of years? Well, the answer isn't a revolution in the basic techniques of washing. It's more a series of refinements that use less water and energy to do the same job.

Traditional washing machines are made up of two tubs: an inner tub that holds the clothes in place and allows water to pass in and out via a series of holes, and an outer tub that keeps the water contained until it's evacuated in the spin cycle. The actual agitation occurs from the action of a center post that moves backward and forward, churning the water and clothes briskly to release dirt. The loosened dirt is held in suspension by the detergent until the water is later removed. A standard washer loads from the top and holds from 12 to 16 pounds (5.44 to 7.25 kilograms) of laundry and enough water to submerge clothing and other textiles completely during the cleaning process.

There are a number of ways this is an inefficient design. If the load becomes unbalanced, the machine can make a lot of noise or even jump around during the spin cycle. A standard washer can leave a lot of water in the clothes after the spin cycle has completed, too, causing the clothes dryer to expend more energy to do its job. Because each load is totally submerged (for most of the process, anyway), standard washing machines use a lot of water, too. 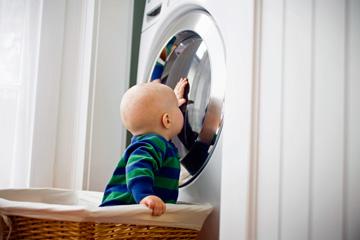 A front-load washing machine does some key things differently from a top loader. If you take a look at one, the first thing you'll notice is that it doesn't have an agitator. Instead of beating the clothes back and forth in water, it rotates them up out of the water. Gravity causes them to drop back down into the slurry. This washer design mimics the action of an agitator with one big key benefit. You don't need nearly as much water to complete the process. This method of agitation generates plenty of dwell time in water and in some cases only requires half water volume of a standard top-load washer. Water savings isn't the only benefit, either. Half the water means half the energy required to heat it, spin it around and remove it later.

Front load washers can also typically handle larger loads. Where an old style top-loading washing machine can wash between 12 and 16 pounds (5.44 to 7.25 kilograms) of laundry per load, front load styles can handle up to 20-pound (9-kilogram) loads. That means half the water usage and larger washing capacity.

Front-load washer design energy efficiency isn't limited to reduced water consumption and larger load capacity. Many front loaders are very efficient when it comes to spinning residual water out of clothes, too. Removing more water than standard top-loading machines means less drying time and savings on the drying side of the process as well. Next generation washers have also made the switch to more energy efficient direct drive systems that still generate adequate speed and torque, but do it with less power consumption. As an extra bonus, these systems need less room for the "innards" of the machine and result in a more efficient, lightweight design.

From a design standpoint, front-load washers can be a breeze to put in place. When you don't have to worry about keeping the top of the unit clear, you can stack a washer and dryer combo in a small utility area without a major home renovation and a big appliance footprint.

Before you run out and invest in a front-load washer design, high-efficiency, top-loading washers may be worth a second look. The standard top-load washer we've been talking about has undergone a makeover in recent years to bring it up to the standard of high efficiency front-load models. From direct drive systems to units that use much less water, top loaders are catching up in the energy efficiency department.

Take a look inside a new generation top loading washer and you'll discover that it doesn't have a conventional center-post agitator. It still flips or spins the clothes to get them clean, but uses less water to do it. Many models also use a high-pressure spray to soak and rinse the clothes, which cuts back on water consumption because the drum doesn't have to fill with water.

High-efficiency top loaders spin clothes at high speeds, removing more water from each load than old-style units. Load capacities are larger, too, reaching as much as 20 pounds (9 kilograms), up from 12 to 16 pounds (5.44 to 7.25 kilograms). This puts them almost on a par with front loaders. New top loaders boast efficient fuel consumption, excellent torque, lower water consumption and often a lower cost. They still have lots of user settings that customize the way a load can be washed, though. If those kitchen curtains don't need a 10-minute dunking, you can set them for a five minute wash instead. This kind of flexibility has the potential for saving water and energy as well [source: Consumer Reports].

New generation washers, either front- or top-loading, are far superior to previous technologies when it comes to washer design and energy efficiency. That's one of the reasons why the American Recovery and Reinvestment Act of 2009 set aside $300 million dollars for the Energy Star rebate program implemented by the United States. It provided rebates to consumers who traded in their energy hogging appliances, including washers, for more Earth-friendly Energy Star-compliant models.

The average household generates about 400 loads of laundry each year. That's a lot of water and energy. The U.S. Department of Energy speculates that making the switch from an old style to a new generation washer could save $135 in utility costs annually [source: Energy Star].

When you're in the market to replace your washer (or dryer), pay attention to the Energy Star rating on the replacement model you have in mind. The Modified Energy Factor (MEF) will tell you how efficiently the washer runs, how much energy is required to heat the water and how efficiently the dryer operates. The higher the number, the better the MEF ranking is. To qualify for Energy Star, washers must have an MEF rating of 1.80 or higher. The Water Factor (WF) evaluates water efficiency. Look for a low number to identify the most efficient washer models. To learn more, visit the Energy Star Web site: Energy Star Qualified Clothes Washers.

What's the Difference Between Toilet Paper and Tissue?
How Steam Dishwashers Work
How to Choose Kitchen Appliances